The game went to an exciting rubber set, which saw Nanyang fight back and almost cause an upset. Jurong eventually prevailed to win 2-1 (25-21, 18-25, 25-23). It was indeed sweet revenge for Jurong as they had narrowly lost to Nanyang in their earlier encounter at the group stage.

The first point was won after a long rally, with Jurong mis-hitting on a receive. Both teams seemed to have trouble getting into the gear as safe hits saw long rallies ensue. However, Nanyang pulled off a quick one to lead 6-1, forcing Jurong to promptly call for a time out.

Nanyang pulled ahead to 14-8 later in the game but Jurong slowly started catching up, levelling the score at 17-17 after forcing a touch out from Celene (Nanyang #2). Jurong then took the lead after Nanyang had difficulty sending the ball back. Jurong went another point up when Eleanor (Nanyang #1) spiked into the net after a bad set.

Jurong continued holding on to their lead and were soon at set point when Yiyuan's (Nanyang #3) attempt to receive a cross court spike with one hand from Rachel (Jurong #10) failed. Jurong wrapped up the first set 25-21 after Eleanor (Nanyang #1) spiked into the net from the back court.

It was now Jurong's turn to take an early lead in the second set. However, Nanyang stepped up their game in the set and fought hard to catch up. They drew level at 7-7, and went ahead to take the lead back from Jurong.

Chuning (Nanyang #5) took the last point for the team when her cross court spike forced a ´touch out' from Jurong to wrap up the second set for Nanyang.

Heading into the rubber set, Jurong were not going to let Nanyang steal victory from them once again. Cynthia (Jurong #11) fired off several good serves to keep Nanyang at bay. With Zi Qing (Jurong #8) and Rachel (Jurong #10) manning the net section, Jurong chalked up numerous points against a fumbling Nanyang defence. Jurong quickly blitzed to a 12-5 lead, leading to a time out from Nanyang.

Upon resumption, Nanyang took service back after a spike to the left line from their open spiker. They took the subsequent two points to trail 8-13 at the changeover.

Good attacks by Eleanor (Nanyang #1) saw the team pull closer to Jurong, erasing the huge deficit. As Jurong went ahead, Nanyang tried to narrow the gap but Jurong stepped on the pedal and were soon at 23-14, with high hopes of finishing the game quickly.

Nanyang were not going to go down without a fight and took the next point after Chuning's (Nanyang #5) spike into the block rebounded into Jurong's court, catching Cynthia (Jurong #11) off guard. A net touch by Rachel (Jurong #10) delayed Jurong's bid to reach game point further.

However, Jurong reached set point after Nanyang had difficulty getting the ball back at the next rally but Nanyang saw their hopes kept alive when Jurong spiked the ball out of bounds on the next point.

Eleanor (Nanyang #1) stepped up to her game and tried to deny Jurong a quick win. Good blocking soon saw Nanyang close the deficit to four at 20-24, prompting a time out from Jurong.

It was turning out to be a nerve-wracking rubber set. Everyone had expected Jurong to finish off the game quickly but Nanyang were staging an incredible comeback.

Upon resumption, Rachel (Jurong #10) hit the ball spiked out of bounds to see Nanyang draw closer. Eleanor (Nanyang #1) then spiked from the centre into the right corner to bring the team to just two points from Jurong.

As everyone sat on the edge of their seats, Jurong still could not finish off the game as Rachel (Jurong #10) had difficulty spiking the ball across due to the set being too close to the net.

The rally for the next point was painful for both teams in different. After a hotly-contested rally, Jurong sealed the game when their middle spiker sent the ball to the left corner, leaving Nanyang unable to return.

Nanyang's incredible comeback waspermanently halted, and heartbreak was inevitable. Jurong on the other hand, while celebrating their win, saw Hui Ting (Jurong #1) grimacing in pain after getting injured after landing awkwardly during the last rally.

It was indeed a match worthy of a final, and it was certainly unfortunate to see an injury at the last moment. Nevertheless, congratulations to both teams for a performance well done. 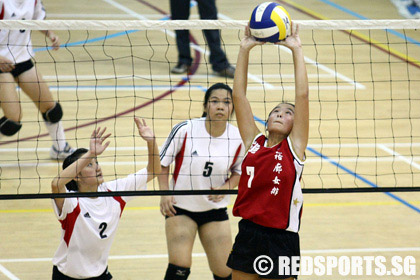 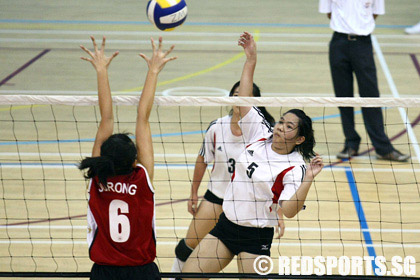 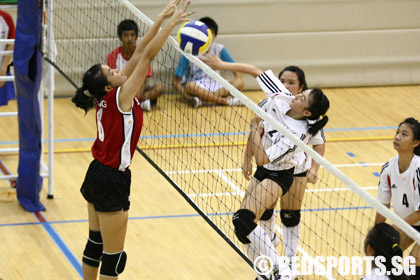 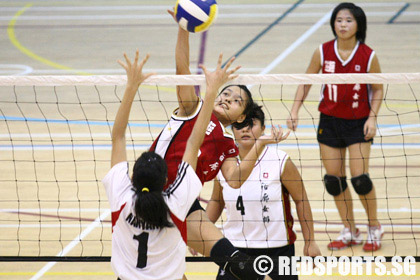 Qiuyun (Jurong #6) spikes while Eleanor (Nanyang #1) tries to block. Both Nanyang’s blockers seemed to be off form for the match as they encountered difficulty in shutting out Jurong’s attacks at the net. (Photo 5 © Lai Jun Wei/Red Sports) 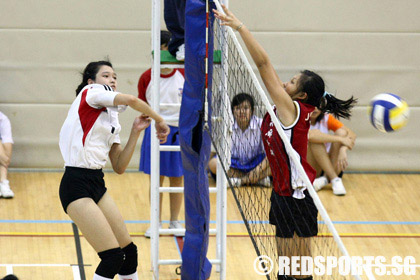 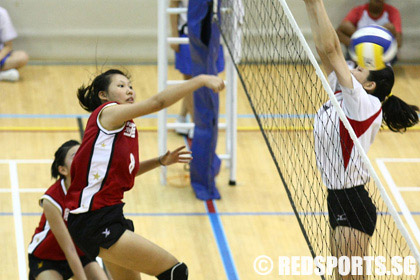 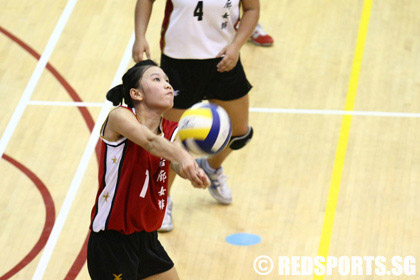 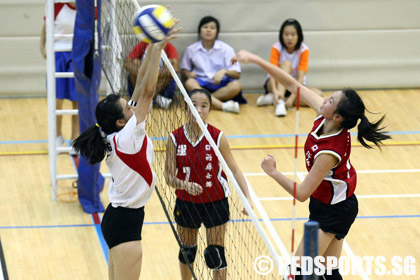 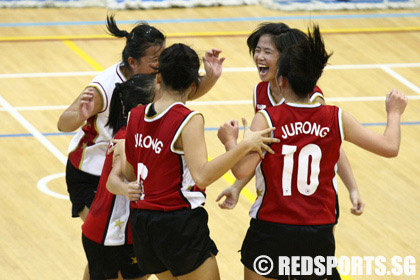 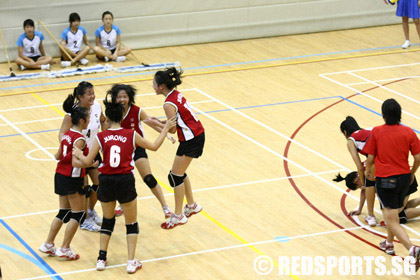 It was however, very unfortunate that Hui Ting (Jurong #1) injured herself right at the last rally. (Photo 13 © Lai Jun Wei/Red Sports)

More photos in the gallery.

Editor's note: If you recognise yourself or any of your team mates in the photos, please feel free to leave the names behind and we will update accordingly. Thanks!