New Balance back in the running for Singapore Marathon 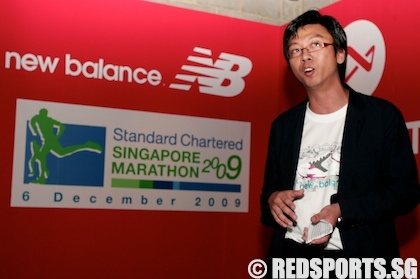 When the estimated 17,000 runners start off on their 42.1km marathon tomorrow, another chapter in the battle between running shoe brands for market supremacy will also take place.

Running brand New Balance is back in as a sponsor of the Standard Chartered Singapore Marathon, replacing adidas. Rivals adidas had replaced them as a sponsor in 2005 and subsequently went on to sponsor the next three editions.

It is a development that the New Balance team in Singapore is happy with.

“From the brand point of view it is actually a good run for us because the brand is about running. Running is in our blood and running is what we are good at,” said Mr Patrick Wong, the New Balance country representative.

“So to be part of the premier running event is something we have always wanted and it will push the profile of the brand up a little bit as compared to the last few years.”

As for previous sponsors, adidas – who still have the adidas Sundown Marathon on their calendar – their focus on running has taken on a different form.

“The decision [to pull out of the Singapore Marathon] has been largely due to a shift in terms of our Sports Marketing focus for the year,” said Janice Lee Fang, brand manager for adidas Singapore. “This year, for example, we launched a new brand specific initiative, our island-wide running community effort called the adiNation of Runners - a club which seeks to provide runners with a closer touch point with the brand.

“adidas has had an excellent relationship with the organizers of both events over the year and we're confident that there will be opportunities for us to work together again in the future,” she added.

The foray of New Balance into the Singapore Marathon is meant to complement and not replace the REAL Run, the brand’s other sponsorship vehicle.

“We are not going to replace the REAL Run. REAL Run will always still be with us,” reassured Wong. “The marathon is more for the elite while the REAL Run is more for mass participation. This is not the end of our sponsorships. We do have some plans for next year.”

Although there are marathons in different parts of South East Asia, the Singapore sponsorship is not part of a regional plan, confirmed Wong.

“It’s not a regional plan. In different countries, the StanChart Marathon is owned by different organisations and so it’s quite hard for us to do a regional agreement. But we try to make sure we get the other countries involved as well. Unofficially, we are working with StanChart for most of the races,” added Wong.

“In terms of running, depending on how you look at it, we are probably the number one brand. In running, we are very strong on the male side. At most of the races, we do a shoe count, we are either first or number two,” said Wong. “We are weak in the female side because the shoe doesn’t look flattering on the female feet.”

In recent years, the retail scene has seen a proliferation of retail stores set up by Nike, adidas, Fila and Asics. Nike has 14 stores while adidas has four. New Balance too has made their presence felt with four retail stores.

The stores are a necessary part of the brand’s strategy to educate consumers, said Wong.

“Our retail shops are meant to show a complete picture of what the brand offers. The retailers have limited space and they have to cater to all the brands. To a certain extent, they can only present part of the range and so it’s not a true representation of the brand. And because they don’t sell much apparel, they don’t present the apparel story as well,” said Wong.

“But it’s good, because when we educate them, maybe they will subsequently go to the retailers shop to buy. To us, it’s left pocket, right pocket,” added Wong.

Wong acknowledged that regular retailers initially felt the brand was competing with them for business.

Said Wong: “In the beginning they did [treat our shops as competition], but after awhile they realised the advantage of having us because we do educate the consumers on shoes so that when they go to the retailers shop, they know exactly what to buy and that translates to less time for the retailers to convince them to buy. So that’s the good part.”

Despite the economic crisis earlier in the year, New Balance is doing well.

“I’m glad to say that the brand is doing well. We’ve exceeded our sales targets and so it’s a good year for us,” said Wong.

“Our sponsorships, our retail shops, our consultation, helps us to project a more professional image of the brand. So people do want to stay with the brand. We are an accountable brand, reasonably priced and we do make good shoes and so even in an economic crisis like this, people are still coming back to us,” said Wong.