Over the past week, the Royal Varuna Yacht Club in Thailand has played hosts to the Youth Olympic Games (YOG) Asian qualifier for the One Person Dinghy Boys and Girls events in conjunction with the 2009 Byte CII Asian Championship. At this event, three qualifying places were up for grabs in both the boys and girls categories.

Fifty sailors from Thailand, Japan, Singapore, United Arab Emirates, India, China, Malaysia and Indonesia were in Pattaya for the first continental qualifier for the inaugural 2010 YOG.

Mark Robinson, SingaporeSailing's Head of High Performance, said: "The results of the YOG Asian Qualifier show that there is a lot of depth in our Youth Olympic Games programme; Singapore taking the top five places in the boys category and top four places in the girls category.

“Some of our sailors will now be heading to Europe to test themselves against the age-group competition from that continent in preparation for the Singapore 2010 Youth Olympic Games."

Meanwhile, over at Jomtien Beach at the Pattaya Cup, the Singapore windsurfers performed well to secure podium positions in the YOG windsurfing class, the Techno 293.

In the Techno 293 boys' division, Jeddy Tan missed the bronze medal by a mere five points settling for fourth place, and teammate Chuah Jun Ler followed behind in fifth position. 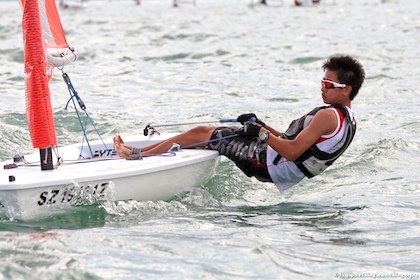