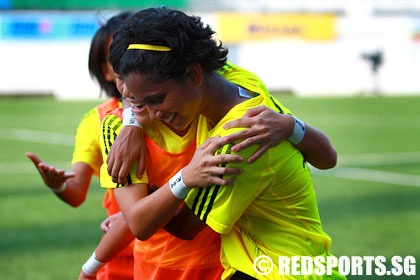 Emotions fill the girls as they fought hard not to have a repeat of the previous year’s loss in the final against SAJC. (Photo 1 © Jolyn Ang/Red Sports)

The sense of mission that the team of 2008 carried with them can be expressed with one word: Redemption. Other than the changes in coaching style and the training schedule, the team went through long period of self-reflection, Azrul included. After all, change had to come from within.

Asked about what thought were his greatest mistakes, he said, "I was too eager to interject, jumping the gun a lot of times. I tried too hard to keep everything under control."

"Also I didn't used to know who is in form, who is best for the team at the right time and tended to stick to a predictable lineup. I think if you look at the latest season, you will find that my starting lineup started to change from game to game. As compared to the previous years, our team has grown in depth and flexibility."

Like Assistant Coach Lim Wei Quan aptly expressed, the team is an image of the coach. The 2008 team ran from the word go and never looked back until the final whistle, when they were met with tears threatening to stream down from a man that had invested so much time and emotion into the campaign.

Threatened with feelings of dÃ©jÃ  vu after falling behind 0-1 in the 2008 final against St Andrew’s Junior College, they told themselves there would be no repeat of second-best and equalized, holding out till the end and regaining the title after a scintillating penalty shootout.

"The feeling was unbeatable. It was elation that was unmatched,” recalled Azrul. “Even when we won this year, there was less of that euphoria, but more of a mix of happiness and sadness as it was a slightly more comfortable win. My mood was flat, and I took the time to observe those around me."

That ambivalence was shared by every member of the team, past and present, as 2009 was to be Azrul's last campaign as coach. Looking to pursue coaching at a higher level, he will be completing his Master's degree in Australia.

"I'm glad we were able to retain the championship, it was a good way to end, but I have to let go," said Azrul.

Azrul's coaching tenure may end, but all that have been mentored by him would testify that his spirit would live on, even if he had deliberately tried to keep a distance from the Year 1s this year.

"I hope the new coach can be given space to impose his own style. I don't want to shape the future and neither do I want to leave my players' development halfway," said Azrul.

The sense of continuity would probably be best felt in the culture and tradition that he has left behind.

Asked for words of advice to the incoming coach, he said after much consideration, "I am just a decent coach, complemented with unbelievable teams of players, assisted by many brilliant people. Don't fix what's not broken. Allocate time and resources to give the girls the best chance (to win) possible."

"I think it is very hard to predict the future, but whoever comes in has very big shoes to fill. He has to have similar qualities - dedication, drive and heart, to keep the team where it is."

As the VJSG team undergoes revolution for upcoming campaign, it will sorely miss a coach who has shaped a team from one without hope to one that is full of it.

Characteristic of one full of hopes and dreams, Azrul's parting words reeked of ambition.

"As attached as I am to VJSG, I believe in the totality of the situation. I laid the groundwork with VJSG, but I can improve much more. I want to move my coaching up to a higher level in Australia. Watch out for me."

Wei Quan had nothing but well-wishes for Azrul. "All the best, have fun, and I hope to see him doing the same things he has done with VJSG on a higher level, or even the highest level." 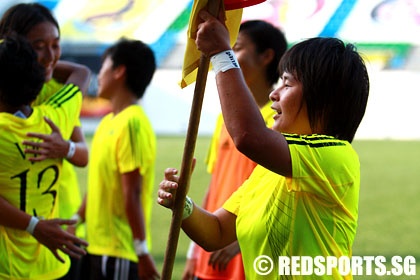