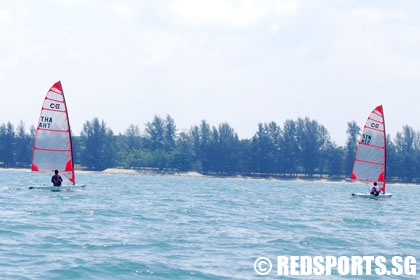 Darren Choy (right) holds the lead against Thailand’s Pongwichean Supakon to win both races, even after he started behind for the second race. (Photo 1 © Vanessa Lim/Red Sports)

National Sailing Centre, Saturday, July 4, 2009 - Singapore's Darren Choy took a comfortable lead at the top of the fleet in the Byte CII category with two composed wins. He will be gold-bound as long as he continues his fine form in the final two races.

Singapore's Najwa Jumali improved her position to second overall after nine races with breathtaking displays against her closest competitor, Thailand's Thanawitwilat, who dropped precious points at the top.

For the windsurfers, Chuah Jun Ler managed to move up in the boys’ standings to fifth after a gutsy performance while Audrey Yong is still clinging on to the third position for the girls.

A total of six races were scheduled as usual but the Byte CII category had the luxury to clock two races in a day marred by thunderstorms after 3 hours of racing.

Here's the breakdown of today's action out at sea:

The windsurfers got their chance to head out to the sea first and Audrey, who finished a commendable second in her previous race, continued to perform well for Singapore in the early stages. However, the current regatta leader, Thailand's Kaewduang Ngam Siripon, collected the minimum points after six races take the fight to the hosts.

Audrey had to settle for second position as Kaewduang managed to pull away by at least 10 boat lengths. In addition, Audrey had to fight off a strong finish by Hong Kong's Man Ka Kei towards the end of the race.

Audrey’s second-place finishing in Race 7 puts her in a firm position to hold on to the silver medal position in the overall standings, as China's Hao Xiumei, who was in the similar position before, dropped points in this race.

Singapore's Chuah Jun Ler began today's race in last position after collecting the most number of points throughout the regatta. But that did not affect his confidence as he broke to a lead at the start of the race. He managed to maintain his speed and distanced himself with the rest of the fleet by a single boat length.

As fatigue kicked in, he fell prey to China's current regatta leader, Wei Bipeng, and Korea's Kim Chaneui. Moreover, he had to bear with a strong challenge from Hong Kong's Kowk Tsz Him. He eventually had to settle for fifth position at the end of the race.

But his finish took him to fifth spot in overall standings after seven races, just in front of Indonesia's I Ketut Shasha Krishna Murti and Japan's Kuramochi Daiya.

The highlight of today's races came down to Singapore's Darren Choy, who looked set to extend Singapore's gold medal tally. Although he snared another two victories in races 8 and 9, he had to tough them out with Thailand's Pongwichean Supakon, who proved to be the closest competitor out at sea.

In Race 9, Darren was straggling at the start with China's Lu Tianhong at the forefront of the entire fleet. Thailand's Pongwichean was in third position at this stage. The three sailors had their best start of the day as they cut loose from the rest of the fleet by at least five to 10 boats' length. The wind conditions were taking a toll on the whole fleet but the top three sailors portrayed their splendid skills to tackle the situation.

It did not take too long for Darren to build an ample lead as he managed to overtake Pongwichean just around the first mark. He extended his sizeable lead till the end of the race as he sits atop of the overall standings after nine races.

Najwa had a good start in race 8 as she was able to lead the pack with hot favourites Thailand's Thanawitwilat Jittiwa and China's Gu Min following right behind her trail.

There was drama in the race as Malaysia's Mohd Afendy Khairunneeta was three minutes late to launch her boat to the start line, due to the H1N1 scare. She displayed great fighting spirit and managed to charge her way to seventh position, just behind Korea's Jeon Eunhae.

To make the situation worse, rain and thunderstorms raged in and caused the sailors’ visibility to deteriorate. Najwa did not seem to be affected as she romped ahead in the midst of the strong gust and waves. Malaysia's Afendy also managed to overcome her disappointing start as she moved up to fourth position.

However, Thailand's Thanawitwilat displayed her ‘never-say-die’ spirit as she sped towards the finish line to claim the top spot while Malaysia's Afendy completed her miraculous comeback to take the third position.

The Byte CII girls had the privilege to host the final race of the day, as Singapore's Najwa finally took first place after a strong finish. She was sure not to let slip her 15-boat lead to her closest competitors, Malaysia's Afendy and Thailand's Thanawitwilat. This race also witnessed a fierce rivalry between Malaysia's Afendy and Thailand's Thanawitwilat for the second spot as they exchanged leads.

Commenting on Darren's excellent performance, Singapore's team manager, Serena Wong, said to Red Sports, "He has been really consistent throughout this competition and he certainly has stepped up against the rest." She is confident that Darren has what it takes to earn the gold medal for Singapore.

On Najwa's improvement in the competition, she said, "She worked really well today and I guess with the coach's guidance, she should be able to fight for at least a silver medal for Singapore."

On the other hand, Singapore's windsurfers did not match up to powerhouse China and the rest of the nations after as many as seven races. She added, "Jun Ler is still young and this is his first major event as for Audrey, she can perform her best if she keeps her spirits and stay relaxed."

Let us all cheer on Team Singapore as they embark on their journey to land more medals for the nation. They are also in the running for the Nation's Trophy, as Team Singapore is currently lying in third position behind Thailand and China. 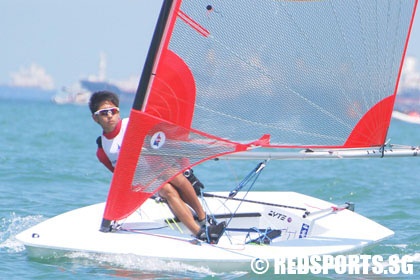 Darren Choy is on track for a gold medal after winning his 2 races today and with still 2 more races left in the competition, he is 5 points ahead of his toughest competitor Pongwichean Supakon from Thailand. (Photo 2 © Vanessa Lim/Red Sports) 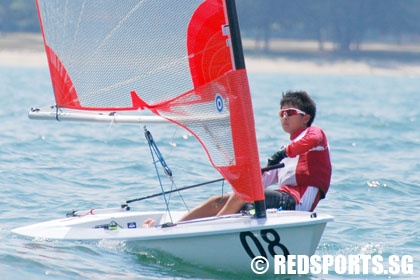 Darren Choy cruises to his second win of the day after starting just behind rival Pongwichean Supakon from Thailand. (Photo 3 © Vanessa Lim/Red Sports) 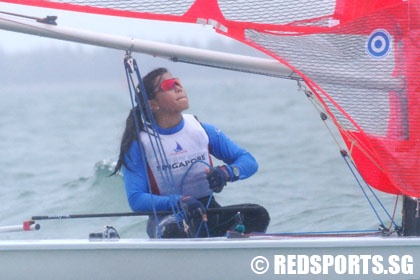 Najwa is not deterred by the stormy conditions as she lines up to get ready to start the first race. (Photo 4 © Vanessa Lim/Red Sports) 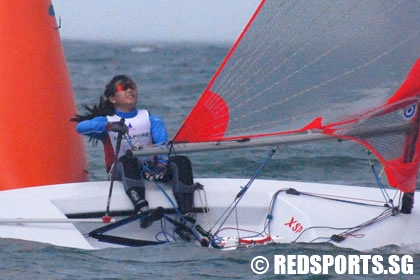 Despite the stormy weather, Najwa comes in 2nd in the first race behind Thailand’s Thanawitwilat Jittiwa. (Photo 5 © Vanessa Lim/Red Sports)