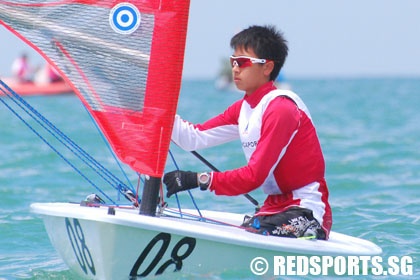 National Sailing Centre, Tuesday, June 30, 2009 - Singapore's Darren Choy notched three wins from as many races in the first day out at sea for the Byte CII category, while Najwa Jumali had a commendable performance after placing third overall in the Asian Youth Games sailing event.

The day’s first action began with the girls' Byte CII race where Najwa had to endure an early scare. A freak gust of wind forced at least half of the fleet, including the sailors from Pakistan, Qatar and Korea, to capsize. But that did not prevent her from staying with the leaders as she maintained a close position just behind China's Gu Min.

She then took the lead after rounding the top mark with Gu and Thailand's Thanawitwilat Jittiwa trailing in her wake. From there, Thanawitwilat switched her tactics to get ahead of the rest of the fleet as Gu tried to break away. With a decisive plan on hand, Thanawitwilat was able to do better than Gu, and clinched the second spot while the latter had to settle for third at the end of the first race.

Over in the boys' division of the same category, Singapore's Darren Choy enjoyed a massive lead throughout the whole course. He led by as many as ten boats' length as he rounded the top mark early, and finished ahead of the pack while Thailand's Pongwichean Supakon and China's Lu Tianhong completed the top 3 places.

However, Singapore did not enjoy similar success in the Bic Techno 293 (Windsurfing) category. In the second race of the girls' division, Audrey Yong only managed fourth position out of five windsurfers while Chuah Jun Ler finished at the bottom of the boys’ pack.

An unexpected third race for the Byte CII category was then decided by the principal race officer, and Darren showed no signs of fatigue as he took his third bullet of the day. Najwa could only settle for fifth position after a fine start that saw her placed third in the opening stages.

At the end of the day at sea, Darren Choy secured the top spot after three races while Najwa managed to place third out of nine sailors.

For Singapore's windsurfers Jun Ler and Audrey Yong, they are currently second from bottom in their respective divisions after two races.

Serena Wong, the team manager of the Singapore Sailing team, said, "It's a good start and overall, it's a good day for the Bytes."

On why the windsurfers were not faring as well, she said, "For Audrey, I think the conditions at sea are not to her favour as she did not complete the first race."

She added, "Windsurfing in Singapore is still in the beginning stages as we started this sport only in the past one to two years. For the bytes, we have been competing competitively in the region as well as on the world stage."

He credited his good performance to his coaches and the training sessions. He said, "I had good physical and mental trainings prior to the Games, with mainly gym workouts and psychology sessions."

Not forgetting that, he had switched from the Optimist class to the Byte CII after his silver medal showing in the 2007 South East Asian Games, and his triumph in the International Optimist Class Team Racing a year later.

He added, "It was not much change, just that the Byte is a bigger boat and there's differences in boat control and handling."

Although Darren has only been given a short 7-month training stint with the Byte, he is already overlooking the rest of the trailing pack on the leaderboard. He will now look forward to his next races in the coming days to extend his lead in order to land the top honours at the Asian Youth Games. But Serena, the team manager, warned her squad not to get too big-headed. 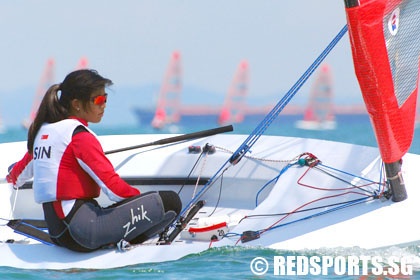 Like her compatriot Darren, Najwa also takes top spot in her first race. But she eventually had to settle for third position overall after the first day of racing. (Photo 2 © Vanessa Lim/Red Sports) 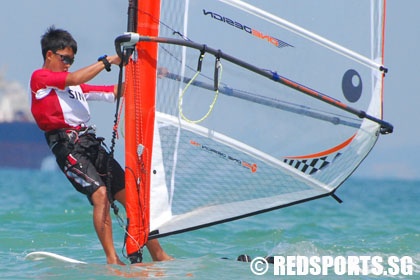 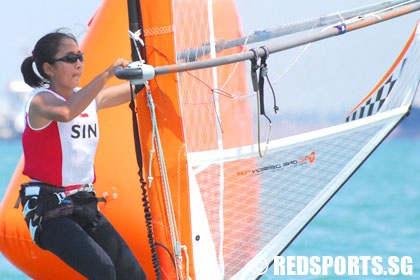