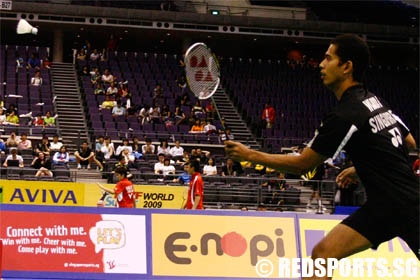 The republic's Indonesia-born shuttlers were on a two-fold mission at the quarter-finals of the annual Championship: To bring glory to their new adopted nation and to recover a battered pride.

The talented brothers came from a family of badminton enthusiasts and were poached by the Singapore Badminton Association in 2004 when Hendri's talent was overlooked despite having competed for the Indonesia's national training camp and won the men's doubles division.

Since making a firm decision to relocate to Singapore in 2005 and then gaining permanent residency, Hendri has won the SNOC's Meritorious Award for 3 consecutive years for his international contribution in the mixed doubles event with former partner, Li Yujia. The China-Indonesia combination even won the republic's first ever mixed doubles medal (bronze) at the 2006 Commonwealth Games in Melbourne.

"It will feel really good to beat an Indonesian pair," admitted the 28-year-old Hendri. "We lost to them in 3 games at the Malaysia Open Super Series in January, but I feel we've done better this time though we wasted many chances and lost our concentration in the rubber game as we got nervous."

Hendri/Hendra tailgated their counterparts in the first 2 games. They were, in fact, neck-and-neck in the first set and even managed to overturn the Indonesians' game point advantage at 20-17 and bagged the first set 22-20.

Though the local pair trailed for most of the second game, they did level up thrice at 10-all, 12-all and 14-all before the Indonesians started pulling away with the local lads giving chase to the end.

Unforced errors started to litter the court in the decider, which started off with not much separating the two pairs. After the half-time break at 11-9, Hendri/Hendra's concentration snapped and that allowed the top seed to flaunt their composure and consistency. Setiawan/Kido raced to an 18-11 lead, but the home crowd saw a new lease of hope when they narrowed the gap to 18-17 before bowing out 21-18.

"We have beaten them in the first round of the 2006 Singapore Open. At that time, this Indonesian pair wasn't at their peak but now having won the Olympics, they are at their prime," said Hendri, the older of the 2 brothers. Hendri also revealed that he has 9 brothers including a twin living in Indonesia.

"We are not fully satisfied with ourselves as we felt we could have beaten them," lamented the pair, who is a quarterfinalist for the second time, "but if we compare our technical abilities between now and the last time we entered the quarterfinal, we are surely playing at a higher level now, nearing our best."

N.B. The event is also known as the Aviva Open Singapore 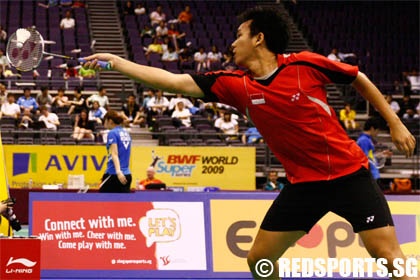 2008 Olympic men’s doubles champions, Hendra Setiawan (above) and his partner Markis Kido, proved to be a hard nut for the local pair to crack in their quarter-final meeting. (Photo 3 © Vanessa Lim/Red Sports) 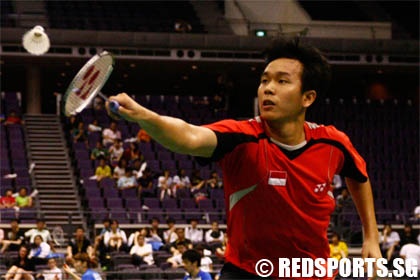 The Indonesian pair is not only the reigning Olympic champion, but also the reigning world champion, world number 1 and top seed at this tournament. (Photo 4 © Vanessa Lim/Red Sports)