Light patchy winds early this morning delayed the start time, but fortunately only slightly. Two races were completed in good time, right on schedule for all courses.

The Byte CIIs continue to be led by Darren Choy, who at eighteen points is still not quite safe from second-placed Terence Choo. Whatever the result, Darren will definitely be assured of achieving his goal for the regatta - to finish within the top two. In third and fourth place are Germaine Teo, who will need to defend her position against Nathan Tang, but no matter what will have earned her place to be considered for the World Championship in August. Further down the line national squad sailors Chai Xun, Clement Lim and Tan Jen U look well set to join her.

In the invitational Byte CII fleet, both gold and silver medals were successfully sewn up by Supakon Pongwichean and Jittiwa Thanawitwilat respectively, both from Thailand. Coming in first place for race ten, the former made it impossible for any other competitors in the fleet to usurp his position. He carried on with a second in race eleven, bringing him to an impressive ten-point total for his best nine out of eleven races. As for the latter, her thirteen-point lead over sailor number three has her safely in second.

The pair of Malaysians in third and fourth will have to battle it out, however; with both only a point apart and having similar discard races, the final race will determine the outcome as to whether Kahirunneeta or Muhamad Amirul Shafiq will come out ahead.

Australian Matthew Wearn maintained his lead of the Byte standards, now four points ahead of his only threat, Jordan Ng. Given the size of the fleet, however, nothing can be certain for these two competitors - they will have to look to the final race to defend or attack as their positions dictate.

While third-placed Ernest Tan cannot reasonably hope to improve his bronze, he may find defending from fourth and fifth not so difficult as a heated battle between Jerrold Ng and Pamela Goh is likely. Both are tied on 45 points, three points behind Ernest.

Over on Alpha course, Justin Liu and Sherman Cheng still trail Griselda Khng and Cecilia Low by two points, and it looks like the regatta is almost over for both sailors: neither have discards worse than a third. While Justin and Sherman have been more consistent overall, Griselda and Cecilia's flashier performance means that if it comes down to a tie between both boats, the latter will win on countback.

Meanwhile Benjamas Poonpat and Narisawa Yu-sawat of Thailand had a good day today, with a third and first putting them back into third ahead of their team-mates Navee Thamsoontorn and Atiwat Chomtongdee. With three points separating the two, the final race will decide which pair gets the podium position.

A similar tussle in the first four of the Laser fleet is going on. Mohd Romzi and Nik Ashraf Qaedi of Malaysia have pulled away from third- and fourth-placed Harrithammry Nasution and Colin Cheng and are separated by two points with both having a chance to win with the last race. Harrithammry and Colin are tied on twenty-seven points, still within reach of the regatta leaders, so it will be down to the last race to see who comes out top of this competitive fleet.

In the Laser Radial fleet, Victoria Chan has ended the day with seventeen points, five ahead of Khairulnizam of Malaysia. With her second discard being a fifth, she has pretty much sealed up the regatta for herself, showing that consistency pays off. Khairulnizam, on the other hand, still has to watch out for Thailand's Keerati Bualong, who after in third place with twenty-five points is in a position to challenge the former and improve his podium position.

Although this regatta may not be run in the Olympic format, with a medal race that could determine the final outcome, the point scores for most of the fleets assure a fierce fight all the way to the end for the competitors. Fortunately with most of the hard yards run earlier, racing was able to finish early today, allowing the sailors more rest to gear up for tomorrow's deciding race. 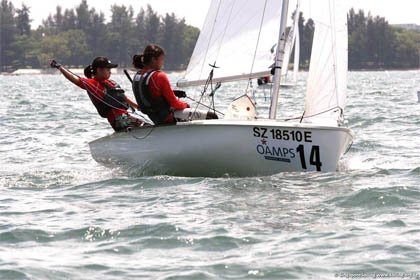 Tight competition among the 84 participants in the Byte Standard fleet. (Photo courtesy of Fulford)