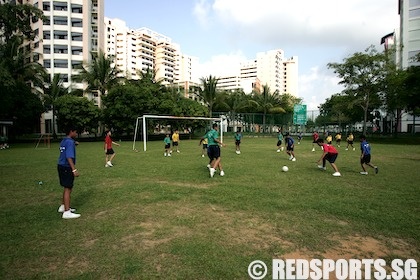 Tucked away in the north-west corner of Singapore is a primary school. And as far as schools go, it looks just like any other. Its students are predominantly from the surrounding neighbourhood, and it has the same level of resources and facilities as other public-funded schools in Singapore.

But Seng Kang Primary School is no ordinary school. Entering the gates on a typical morning, one is immediately greeted by a cacophony of noise and a blur of activity. There are children everywhere, playing basketball, football and running. And instead of starched uniforms, all of them are wearing t-shirts.

"It's organised chaos," chuckles Mrs Lew-Lim Lan Chin, the school's principal. "The children are running all over the place. But they know where they are running to."

Seng Kang is the only primary school in Singapore whose students do physical education every day, rain or shine. With other primary schools offering between two to three periods of PE weekly, Seng Kang's five-times-a-week schedule far exceeds the norm. In fact, says Mrs Lew-Lim, "the joke is that when I go for meetings with other principals, they ask me, ´Did you check your Principals' Manual for the guidelines?'"

In a country obsessed with academic achievement, and at the same time beset by alarming rates of myopia and obesity, Seng Kang's example is truly path-breaking.

So why, contrary to all norms and expectations, did the school decide to do it?

It came down to understanding what children really need, rather than what adults think they need, explains Mrs Lew-Lim. In 2003, the school undertook an exercise to clarify its educational objectives in the cognitive, aesthetic, moral, physical and social domains.

That's par for the course as far as good school management goes, but Seng Kang took the additional and unusual step of asking teachers to observe and speak to the children as a check against their own perspective – what Mrs Lew-Lim called an "ethnographic study".

In the area of physical outcomes, one thing stood out. Across all six levels, the teachers were surprised to discover a consistent desire among the children for more physical education. "I had no clue. Nobody had any clue, I can tell you that," says Mrs Lew-Lim. "So when we saw this, we asked ourselves, ´Whose lens do you want to look through now?'"

The weight of scientific research leans comfortably in the children's favour – study after study has demonstrated the benefits of long-term regular exercise on physical and mental health, and on scholastic performance. In education circles, learning through play and games has also gained credence. "Playing is a powerful pedagogy," says Mrs Lew-Lim, "so when this [call for more PE] came out, it aligned straight away."

In 2004, less than six months after its objective-setting exercise, Seng Kang Primary School launched daily physical education for all its students.

But change is difficult. As many as 80% of the teachers were not ready to come along at the start, estimates Mrs Lew-Lim. "Fundamentally, no teacher had difficulty accepting that this was good for the children," she says. "But this was a mega-change. It's not just two periods to five periods. We are a regular school with an irregular approach. We have the same number of teachers and facilities."

But within the first year of implementation, Mrs Lew-Lim said that "the 80% had shifted to 50%. And three-quarters into the first year, the teachers accepted that we could carry on the next year."

How did Seng Kang make it happen? Look out for Part 2 of this feature. © Red Sports

Enjoying the freedom of the field in a football game. (Photo 2 © Les Tan/Red Sports) 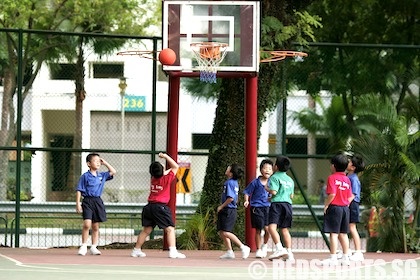 While some are playing football, others take to basketball. (Photo 3 © Les Tan/Red Sports) 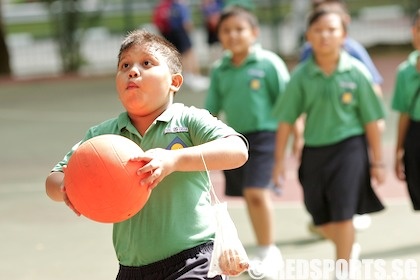 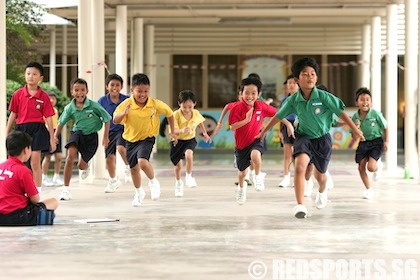 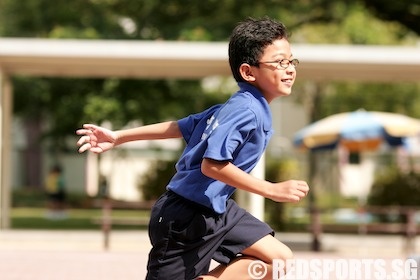 For some reason, the kids are always running… (Photo 6 © Les Tan/Red Sports) 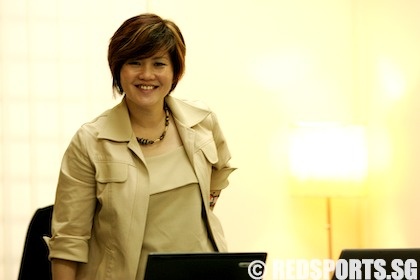