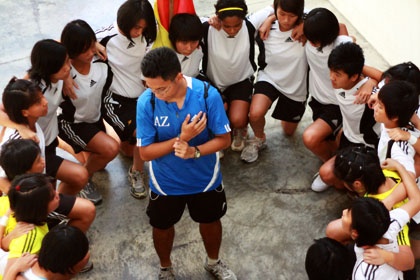 The Victoria Junior soccer girls started to mature from a collection of like-minded individuals to a unit under Azrul’s holistic coaching. (Photo 1 © Jolyn Ang/Red Sports)

Change. A word so widely used that people forget that it takes a lot of courage to deviate from the familiar and seemingly secure, to embrace the new.

When asked about what were the greatest changes he had seen over the years, Azrul was quick to answer.

"The commitment levels and the maturity of play. We never shied away from playing a passing game, even if sometimes the execution wasn't perfect, we tried."

In order to become competitive, the team started to increase training sessions, from 2 to 3 times a week to almost everyday nearing the start of the season.

For the batch that was caught in the midst of such dramatic change, it was difficult to adapt.

"Many girls take up soccer for leisure or purely out of curiosity, and it was difficult to impose my ideals gained from my years in the VJC boys' soccer team."

That being said, Azrul stuck to his guns and continued with his honest, earnest method of coaching, even if sometimes, he may have been deemed brutally honest.

"I wanted a healthily stressful training climate. I placed a lot of emphasis on the atmosphere at training as I think the girls have to get used to the rigour such that when they are put into the game, they are able to adapt much faster."

As batches came and went, slowly but surely, the culture and identity of VIctoria Junior Soccer Girls (VJSG) started to materialize, and solidify. VJSG started to mature, from a collection of like-minded individuals, to a unit drawn together by the torturous training.

The fine-tuning process was not smooth sailing but the failures along the way gave way to success.

In 2007, the team was pursuing a double. Buoyed by the euphoria and expectations, the team "was not at an emotional optimum". The girls shifted a gear too high, and when St Andrew’s Junior College scored what turned to be the only goal in the final, the emotional baggage took its toll on the players.

It turned out to be a timely lesson for a coach going into his third full season as radical change was abandoned for a much more subtle and complex balance.

"I realised that we needed to get a balance to match the context. I wouldn't compromise on my ideals of hard work and commitment, but I had to compromise on my methodology. I did some tweaking in terms of interaction with the players. Whilst always committed to their welfare, I started to learn to cater to different personalities better, in terms how to get the best out of each player in my team."

That he dedicated as much energy off the field as on it, was characteristic of Azrul's holistic coaching style.

The training regime was likewise, not spared. Ask any student of VJC and they would no doubt highlight fitness to be one of VJSG (and the boys' team) main strengths.

Such fitness was gained through raw long-distance training, and remains the core of Azrul's training regime, but pure fitness did not automatically translate into match fitness.

The training regime was changed to mimic the game, giving the girls much more time on the ball than before.

"No doubt, 2007 was a year of mixed feelings, but it was to be our impetus for the next two years," said Azrul. 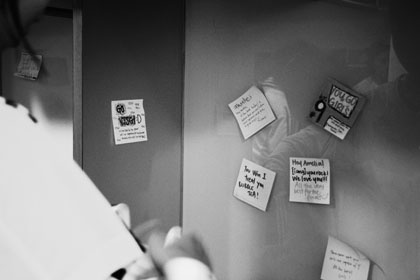 Post-it notes fill each cubicle in the locker room, providing much needed encouragement and support to these girls who were carried the responsibility of maintaining a winning tradition. (Photo 2 © Jolyn Ang/Red Sports) 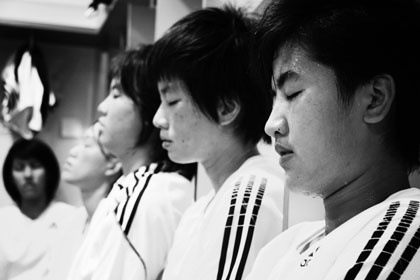 Emotional and mental preparation is just as important as the technical preparation. “Half the battle is won before the match.” (Photo 3 © Jolyn Ang/Red Sports)