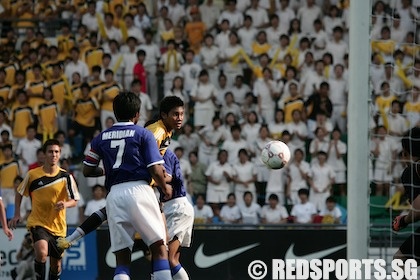 Muhd Khairil glances in the winning goal for VJC in second half stoppage time to ensure a 3-2 victory. (Photo 1 © Les Tan/Red Sports)

The 3pm start time under the scorching sun plus the adrenaline of a national football final meant fitness would come into play in this game. Added to that the heart-pounding and ear-splitting cheering from supporters of both schools – the loudest cheering you’ll hear at a football game on this island – the stage was set for an exciting game.

A blistering start saw VJC take an early 1-0. Alex (#10) found some space on the left flank and his cross was met by Asyraf who placed his header over Edmund Wong in the (#32) in the MJC goal. 1-0 to VJC.

But MJC came right back. Their constant pressure yielded them a free-kick from 30m out. Up stepped their captain Fazli Hisham (#7) who hit it straight at the VJC keeper Ifwat Wafiy. It was not a hard shot and everyone expected the keeper to pluck it safely from the air. To his and the collective horror of the VJC crowd, it squirmed from his outstretched hands and bounced over the line. 1-1 and the MJC crowd roared their approval.

Man for man, MJC had the measure of the VJC team, nullifying any attack, while their constant probing left VJC fans with the gnawing dread of another MJC goal.

Alex (VJC #10) then missed a one-on-one situation to leave the score unchanged and the miss would haunt VJC.

VJC’s Jasper gave away another free-kick to MJC and this time Attah Joseph (#21) stepped up. Of all the people in the VJC wall, Joseph’s blast chose to take a wicked deflection off the head of Jasper and the ball hit the back of the net while VJC keeper Ifwat was left flat footed. VJC, and Jasper, were feeling particularly unlucky by now.

With MJC holding their first lead of the game at 2-1, VJC did not look likely to score. But an individual piece of finishing by Alex changed the scoreline. VJC keeper Ifwat’s kick upfield was met by the head of Anders Aplin (VJC #9). Another teammate met Anders’ header with another flick on and the ball landed nicely in the path of Alex who bore down on the right side of the MJC penalty box.

VJC fans wondered: Was he going to shoot? His answer was instantaneous – a blast with his right leg that arrowed across the diving body of MJC keeper Edmund Wong to nestle in the far corner of the net. A predator’s goal and the score was now 2-2. Game on.

After the excitement of the first half with four goals and lots of action, the second half was an anti-climax. The 3pm start was taking its toll as players from both teams started going down with cramps. The most pained sufferer was Attah Joseph (MJC #21) whose cramp was so severe that his bulging thigh muscles were rigid with cramp and he had to be carried off the pitch.

With the injuries, the game was going nowhere as a spectacle but with the passing minutes, the tension ratcheted up. A goal at this late juncture would surely spell the winner.

MJC had two golden chances to score through Joseph Tai (MJC #23), the second of which was a header that was headed for goal but Ifwat pulled off a stupendous save to make up for his first half error.

A blistering shot by Anders (VJC #9) from outside the box was not held by MJC keeper Edmund. The ball spilled loose and bounced up nicely into the path of the onrushing Alex. However, from less than 2m from the goal line and with the whole goal gaping before him, he somehow contrived to put the ball over the bar.

Even though the ball fell to his weaker left leg, he pounded the ground in extreme frustration while the VJC bench saw coach Tan Yew Hwee sprawl to the ground like he had been shot. The VJC bench must have thought this was going to be a repeat of the 2008 final where Alex also missed chances that cost them the championship title.

By this time, everyone was expecting extra-time but the final act was yet to be played out. In the second minute of extra time, a throw in by Cephas Ong was headed on by Anders Aplin. In the middle was the waiting Muhammad Khairil (VJC #5). Rising with him were two MJ defenders but Khairil got his head to the ball first.

It was not a hard header but the ball’s bounce fooled MJC keeper Edmund and went in to send the VJC crowd into delirium. 3-2 to VJC was how it finished, and VJC put to bed their 1-2 loss to MJC in last year’s final.

In an on-field incident witnessed by many and sure to be discussed for days on end, the MJC taunt to VJC to “go fly kite” got the better of VJC’s Khairil and he made a mocking gesture – putting his thumb on his nose and wiggling his fingers – to the MJC crowd in return after teammate Alex scored the second VJC goal.

After getting scolded by coach Tan Yew Hwee immediately after the incident, Khairil was marched to the MJC principal after the game by his coach and made to apologise.

The winning goal was unexpected.

For MJC, this was their fifth A Division final appearance in a row.

“That’s football,” said MJC coach Fabio Fanticelle Da Silva. “It was a loss of concentration in the last two minutes.”

“It was a very good save by the VJC keeper,” said coach Fabio, referring to the save from Joseph Tai (MJC #23) in the dying moments of the second half.

“Last year was our year, this year is their time. Our boys worked very hard and we have very good support from the principal and teachers.”

MJC are also well placed for A Division football honours next year.

“Seven of the players will be back next year,” coach Fabio confirmed.

“It’s really honourable to score in the final on such a big stage,” said Muhd Khairil, the scorer of the winning goal and who also bagged the man-of-the-match award. “Lucky the ball went in. We had many chances to score but we threw it away.”

Khairil finished the season with four goals, but that last one will live long in the memory for him and VJC.