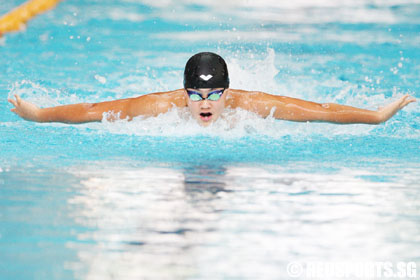 Joseph Schooling sprinting away to another record in the 100m Butterfly. (Photo 1 © Marvin Lowe/Red Sports)

Singapore Sports School, Tuesday, April 28, 2009 – Who says that there are no talents in Singapore’s swimming scene?

That, according to Singapore’s swimming ace and guest-of-honour Ang Peng Siong, was proven false when Joseph Isaac Schooling of Anglo Chinese School (Independent) smashed the national U14 butterfly record in style at the National Inter-School Swimming Championships.

Jonathan Poh of Singapore Sports School won the 100m B Division Butterfly race in 58.28s while Ng Tze Kang of RI won the A Division race in 58.04s.

Joseph had started the race neck-and-neck with his competitors, but turned magnificently at the 50m mark to power home at least two body lengths ahead of his nearest rivals. His teammate Jerryl Yong broke the old meet record as well, finished second in a scintillating time of 59.88s.

Their rivalry was further intensified in the 50m Butterfly race between Joseph Schooling of ACS(I) and Lee Zheng Kai of Raffles. Zheng Kai had broken the previous 50m Butterfly C Division record during his heat by recording a time 27.34s. However, his record was in turn broken by Joseph in the final eventually. It was a close race, but Joseph edged out Zheng Kai narrowly and clocked a time of 27.03s, shaving 0.3 seconds off the record.

The ACS(I) relay team then smashed the record for the 4x50m medley relay in the afternoon session, cutting down a record they set during the heats by 2 seconds to 1:52.49 seconds. Although the Raffles team also bested the record, they had to settle for second again.

Joseph, a potential Asian Youth Games (AYG) representative for Singapore, was elated at his timings.

“I broke my PBs in both my events today!” gushed Joseph.

This unfortunately might be his last inter-school championship as he plans to further his studies and swimming development in the United States next year. 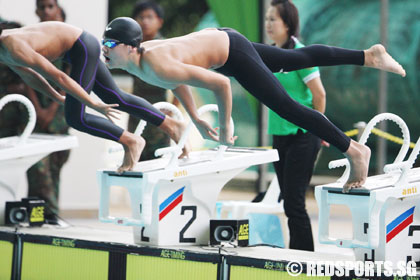 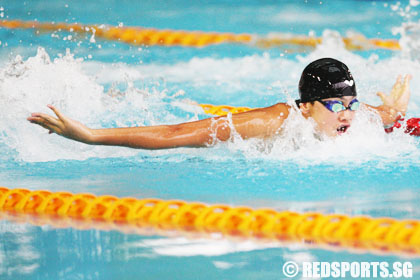 Joseph Schooling sprints to another record in the 50m Butterfly as well. (Photo 3 © Marvin Lowe/Red Sports) 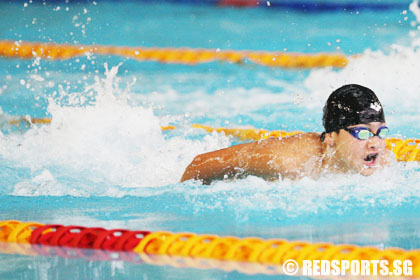