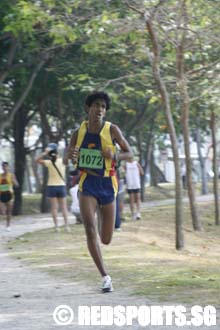 Zachary Devaraj of ACS(I) on his way to winning in the U-17 boys’ category. (Photo 1 © Lance Tan)

Bedok Reservoir, Saturday, February 14, 2009 – Siblings Mok Ying Ren and Mok Ying Rong won the Men’s Open and Women’s Under-17 categories respectively at the Wings Cross-Country Championships, one week on from their credible performances at the SAA Road Relays.

Ying Rong, representing Raffles Girls’ School,Â won in a timeÂ of 16:45 min,Â with the next fastestÂ runner, Clara Wong of Methodist Girls’ School, some way behind in 17:35 min. This victory will give Ying Rong confidence to claim theÂ individual crown in the upcoming girls’ Under-17 Cross-Country ChampionshipÂ onÂ March 25th at the same venue.

As Ying Rong crossed the finish line to stamp her dominance in the Under-17 girls’ category, her coach and brother, Ying Ren, representing Wings Athletics Club,Â was just getting warmed upÂ for the start of the Men’s Open race.

Ying Ren had no illusions about the difficulty ofÂ his task as he was up against ‘A’ Division cross-country champion Soh Ruiyong of Raffles Junior College. Ruiyong trains under the tutelage of Mr Steven Quek, who once coached Ying Ren as well and currentlyÂ coaches the NUS, RJC, River Valley High and Singapore Sports School teams.

As the race got underway, YingÂ Ren and RuiyongÂ headed the pack of runners and were soon locked in a duel.

Hoping to shake off Ruiyong, Ying Ren put in sporadicÂ bursts of pace at frequent intervalsÂ inÂ the first half of the race.Â Undeterred, RuiyongÂ kept up the pressure and was running off Ying Ren’s shoulder as they descended from the only hillÂ on the course.Â

Ying Ren emerged the stronger of the two on this dayÂ as hisÂ greater years of conditioning and experienceÂ edged Ruiyong by three seconds. Ying Ren won in a time of 13:53 minÂ on the approximately 4.5km-long course.Â

Ruiyong, 18,Â nonetheless, is still one of the fastest Singaporeans at the moment over 5km and 10km and is a favourite toÂ retain the individual title at the National Inter-School Cross-Country Championships.Â If he does so, he willÂ join aÂ rare breed of runners who haveÂ achievedÂ double champions status at the ‘A’Â Division level.Â Ying Ren came in second in his second year of junior college and missed out on the accolade.Â

In other races, Anna Thompson led Dinah Chan and Elaine Lim toÂ a Wings sweep of the medals in the Women’s Open in aÂ winning time of 15:28 min. In the Under-14 Girls’ category, Sports School runner Nicole Lim edged out Charlene Oh of CHIJ (Toa Payoh),Â with less than a second separating the two.

In the Under-17 Boys’ and Under-15 Boys’Â categories,Â Zachary Devaraj of ACS(I) and Marc Amiruddin won in times of 15:22 minÂ and 15:39 min respectively.Â Â

The Wings Cross-Country Championships was aÂ valuable opportunity for many schools to gain race experience at the Bedok Reservoir where the National Inter-School Championships will be held as well.Â For the few schools and their athletesÂ who did well,Â the race was a confidence booster headingÂ into the last monthÂ before race day. 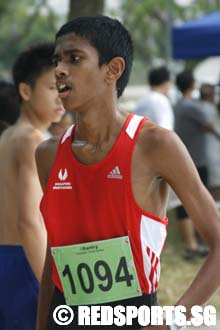 T. Haarishankar (above) of the Singapore Sports School is last year’s C Division boys’ cross-country champion. Now in the B Division, he finished 26th and over a minute behind Devaraj at this Wings meet. Can he pick up his fitness in time to pose a challenge to Devaraj, his peer, at the National Schools Cross-Country Championships in a month’s time? (Photo 2 © Lance Tan) 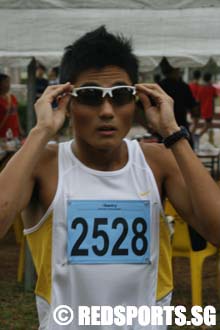 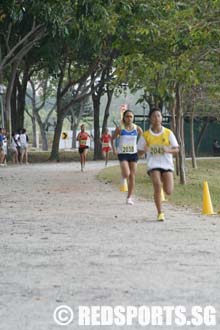 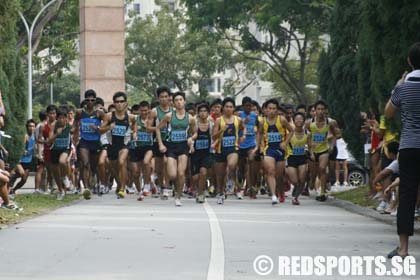 The athletes from the Men’s Open start their race. (Photo 5 © Lance Tan)