The changed face of the national football scene 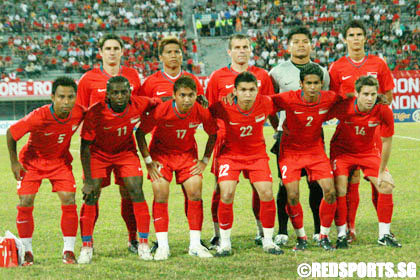 Over the last few years, the Singapore national football team has evolved to look more like a club than a traditional national team.

They all are now Singaporean citizens of course and Mustafic, Agu, Precious, Jiayi and Bennett came through the Football Association of Singapore Foreign Talent Scheme.

Aleksandar Duric and John Wilkinson are the only two naturalised Singaporeans who applied for citizenship on their own because they decided to make Singapore their home.

In 1966, Singapore had a football squad that finished fourth in the Asian Games. The ethnic breakdown in the squad saw one Eurasian, seven Malays and eight Chinese players.

In 1980, a Singapore team coached by Jita Singh took part in the 1980 Pre-Olympics Qualifying Tournament and reached the final after famously scalping North Korea 3-1 and China 1-0. It also defeated India 1-0 and Sri Lanka 3-0.

The only defeat it suffered in the round robin matches was a 0-3 loss to Iran.

Singapore finished second in the group behind Iran, to earn a place in the final against Iran. There, we lost 0-4.

That squad had four Chinese, eight Malay, one Eurasian and two Indian players.

The squad that won the last Malaysia Cup in 1994 before Singapore pulled out of that tournament had five Malays, four Chinese, one Indian and two foreigners.

The squad that won the 1998 Tiger Cup had one Chinese, three Indian and 16 Malay players.

The current 2009 squad that featured in the recent 2008 ASEAN Football Championship (Suzuki Cup) has one Eurasian, two Nigerians, two Serbs and two English.

Obviously, there are many Chinese, Indian and Eurasian footballers that can play football at a national. They just aren’t in the national age-group set up.

At A Division level, there have been some exceptional football talent but the national age-group set up doesn’t attract them.

A cited reason is always the need to concentrate on studies. However, it may be more of a smokescreen than anything else because we’ve been told that some student athletes are actively discouraged to join the national set up because the players come back to the school less fit.

In other instances, some Chinese, Eurasians and Indian players find themselves shut out on the pitch because the Malay players play among themselves.

The other natural barrier is language, with the Malays, the dominant group, generally conversing in Malay and the rest feeling left out.

In an earlier time, Chinese, Eurasians and Indians took the trouble to learn Malay and Singapore society on the ground got along in a mixture ofÂ Pasar (market) Malay and English. It was not uncommon to see kids from different races playing together outdoors. That is not the situation anymore.

As a result, the pool of available talent has shrunk and the FAS Foreign Talent Scheme was just an acknowledgment of the situation on the ground.

The recent turnouts for an FAS trial for the new Under-8, Under-10 and Under-12 squad confirms this trend, as reported by Today (The mix can only get better; Monday, February 2, 2009).

Most of the kids who turned up were Malay kids with a very small turnout of kids from other races.

If it wasn’t for the fact that English is the medium of instruction, our society would be even more polarised on the ground. As it is, the youth are growing up in language enclaves, with certain sports dominated by one language group.

Having a policy of coaches speaking English only to school squads will go a long way in reclaiming lost talents for all sports, so that boys of different ethnic backgrounds can play together based purely on talent, and not just the ethnic language they happen to share with the coach. Â© Red Sports