“I didn't get any hand outs during NS.” An interview with Ben Tan – Part 5 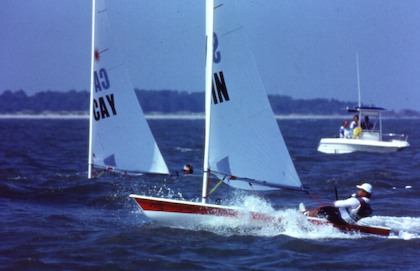 Ben Tan in action during the 1994 Olympics. (Photo courtesy of Dr Ben Tan)

Did you train everyday?
Primary school, no. Secondary school was Saturdays, Sundays and one weekday to at least do physical training. From JC onwards, it was practically everyday. And I'll go to the gym 6 days a week, sailing also 6 days, so my rest day is usually a weekday.

Which JC did you go to?
Hwa Chong.

So you managed to go through a JC curriculum and medical school while training everyday?
Once I got to JC, which was more autonomous at that time, Hwa Chong recognized Sailing and they even said that if you represent Hwa Chong, you don't have to do PE. That's the difference in support. So I was excused from PE but I still did PE to get on with my classmates, because with the amount of training, you are so much fitter already, PE is nothing to you, so I treated it as a social thing.

In University, the rule was I could sail in overseas races as much as I want but if you fail your exams, just don't use it as an excuse. This is the real world situation.

Just like when you work as a houseman, you want to go out also can, but you answer to your colleagues because if you go, your colleagues do the work for you. So I've learnt from young that I carry my own weight. Even if I go overseas to race, the total work I do will still at least be the same as other people, which means I don't take hand outs.

I sleep later, I work longer hours, I do more calls to make up for the day, but I make up for everything.

Same thing with NS. I didn't get any hand outs during NS (National Service – compulsory military service for all Singaporean males), I did as much work as I did as someone who has to do his two and a half years of NS.

What did you do in NS?
I was in the Navy.

So what was the best moment for you in Sailing?
There are a lot of different things. People may think of course it's the Olympics, or the Asian Games, but I've learnt how to appreciate little things. The important thing is actually not crossing the line and winning. The significance behind crossing the line first is the work that went into it that got you to cross the line first.

There was one year I wanted to test whether the process was as good as it used to be and hopefully it is even better. So in 2000, there was an Asia Pacific Championship which involved New Zealand and Australia, which are sailing powerhouses and of course the top Asian countries, Japan and Korea were all down there.

So I wanted to see, if after I've retired, I still have the process, which I've continued to fine-tune and if it is better than it used to be, or at least, same quality. So I used the process to train for the Asia Pacific Championship.

After 3 months of training and I went to the Asia Pacific Championship and I finished 3rd and I was the top Asian. The third placing also gave me an automatic placing in the World Championship, which has quota invitations.

So I pre-qualified four years after retiring, using the same process though of course I suffered in the race because after retiring for four years, mentally I still can do it but physically my body is a different body and my skin below my foot was all tore off by the second day and my foot was raw. That was how painful it was!

Then did you go for the World's?
You have to be very disciplined about what are your objectives. This (Asia Pacific Championship) was meant to be a test. I made a promise to myself.

You have to prioritise. So the first half of my life, my priority was to be the best sailor I can be, but it doesn't mean I neglect the other priorities but something has to be your sole driver.