“If you don’t have a good crew, you’re useless because you’re only the driver.” An interview with Ben Tan – Part 3 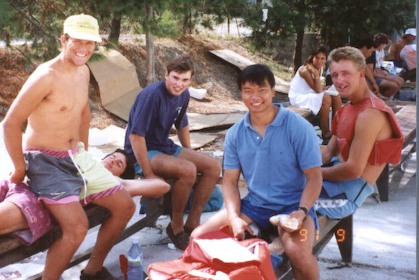 Ben Tan in Greece during the 1991 World Championships at age 24. (Photo courtesy of Dr Ben Tan)

Who were your sparring partners?
A lot. Wee Tun Liang, Casey Tan, Tan Wen Hao, Stanley Chan, quite a lotâ€¦they are all happy sailing with me. They themselves improved as well, of course that is their ultimate motivation, that's why we have to share.

When was your first international race?
Asian Fireball Championship. That was in Thailand in the 1970s.

Did you pay for your own trip, or did the government pay for that?
My father paid for it.

How did you do?
I won. I was 17 years old. Fireball is a class of boat, it's a 2-man boat and in Asia, Thailand is very strong in Fireball class because it is wooden construction and the Thais have the best boats.

In Thailand, since that time, they had a very strong expatriate community and besides the few Thais, it was mostly the expatriates, the British mostly who were based in Thailand, they were dominating the fireball scene. So I went there as an underdog. Nobody knew me.

That was my first international race and I won that one. My crew was Siew Shaw Her.

My father intentionally wanted me to sail 2-man boats, at least for a certain part of my sailing career because of the team work.

Usually the way people work as a team on the boat, there is a skipper and a crew. The skipper is the boss and the crew is the manual worker, that's the kind of relationship that most people have. The rule is the skipper makes all the decisions and does all the tactics, the crew just do all the muscle work and the crew listens to the skipper, full-stop.

When I learnt how to sail 2-man boats, that was the norm in Singapore, but when I raced overseas, I saw that it need not be that way, it could be an equal partnership.

Co-partnership is much stronger, in the long term especially. Otherwise, if the skipper always gets the glory, why would the crew want to work for the skipper? The crew would also want to be the skipper. So the way I worked, which was the way we did it internationally, was an equal partnership.

The division of roles was such that the skipper was the one steering, and he needs to concentrate very hard. You are only a driver, like a bus driver. The crew becomes the tactician actually.

Why should the crew do the glorified role of tactics? It is because the crew has a better view of the course, so he can see what's happening, whereas the skipper has to look just at the bar and the sail, and to concentrate.

Then what about the recognition? In Singapore, at one point, every time they announce the results, they only mention the skipper and never mention the crew. I will always give my crew the glory, saying it's an equal partnership and they've got an equal hand in it.

So I always insist that they mention the crew's name but a lot of people don't do that. It's not the natural way of doing it because everyone wants the glory, so nobody fights for the crew. But if you don't fight for the crew, who would want to crew for you?

And if you don't have good crew, you're useless because you're only the driver and you can't see what's happening and all that. In sailing you need to be able to see and anticipate the wind or where the gust is coming from.

So that's the working relationship between the skipper and the crew. This was one of the reasons why I broke away from the Singapore convention - actually it is not Singapore's fault - it is the Asian mentality. Very hierarchical.

When my father made me sail 2-men boat, he arranged for adults and top sailors to be my crew, so that there is transfer of knowledge. That is why I always respected crews because they are all senior to me, they are the ones teaching me on the boat.