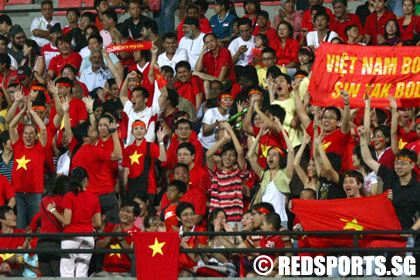 The Vietnamese fans who cheered their hearts out had to deal with rowdy Singaporeans who attacked them after the game. (Photo © Lai Jun Wei/Red Sports)

National Stadium, Sunday, December 21, 2008 – Some Singaporeans showed last night what idiots they were when they criminally attacked Vietnamese supporters who were celebrating outside the stadium after the game, leaving some with bloodied faces.

Singapore lost 0-1 last night in the second leg semi-final of the ASEAN Football Championship against Vietnam and for some ‘fans’, it was apparently too much to bear.

Wrote a participant in online forum kallangroar.com, andy_88: “Was very upset with some of the Singapore fans, especially after the match. I saw very ugly scenes when exiting the stadium, Vietnam supporters being pushed around and their flag being taken away by Singapore supporters. The worst of it was some Singapore supporter who started burning the Vietnam flag and behaved as if it is a heroic act.”

The scene outside the stadium left some folks fearful for their safety, especially those with children. Another participant in the forum, Firdaus1990, recounted what he saw.

“At the East Entrance fights were breaking out and I saw a Malay uncle grabbing his baby and running down the steps because it was getting out of hand and his family had the risk of being caught up in it. The Malay uncle had a couple of kids too and what if he had fallen?

I personally had to grab a Vietnamese fan and push him back because he was in a blind panic and he nearly ran headlong into my girlfriend and could have knocked her down. I feel sorry for him because he was being chased by the crowd.

I saw people being funny and blocking ambulances when it’s obvious people were being hurt.

Somebody grabbed a Vietnamese flag somewhere and they were burning it when a CISCO officer came flying in with his baton.

I was at the overhead bridge when I saw a couple of Vietnamese being brutally punched in their faces. Their faces were bleeding pretty heavily.

I am ashamed at the behaviour of large numbers of our fans. Totally crossed over the line. Most of all I am angry that there was insufficient police protection and organization. Those CISCO cops were almost helpless.”

To abuse our Vietnamese guests while they are in town supporting their team is a shameful display by so-called Singaporean fans. It’s not reflective of the majority of peace-loving Singaporeans obviously but it only takes a few idiots to spoil everyone’s name.

All Singaporeans will agree that the police should throw the book at these mobsters and put them away in jail.

Related story:
"Four or five hit me on the faceâ€¦two or three Singaporeans came to help me out." – a Vietnamese fan recounts a scary night