“It is not often that one gets to write about being last. The Lucerne Marathon was all plans gone wrong, but what an incredible turn of events and experience it became.” 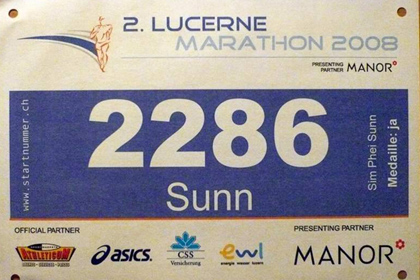 I registered for the marathon a couple of months ago, hoping to do a good timing. All the enabling conditions were present – great weather, relatively flat and scenic route, fantastic supporters and a well-organized event. Except for an unexpected factor - an injured runner who had laid off running for 1Â½ months.

I showed up in Lucerne on the eve of the marathon. Race number collection at the Schweizerhof Hotel (one of the most expensive) was a breeze. There were sponsor booths selling race gear, as well as a free pasta meal for all participants. I bought myself a nicely-designed long-sleeved black race shirt. Over 7,000 people registered for the run this year, compared to 5,800 in its inaugural event last year. All the race information was in German and I could hardly figure out the instructions. It took me a while to realize that the start point was not at the hotel, and I had to take a free shuttle cruise from the main railway station across Lake Luzern. 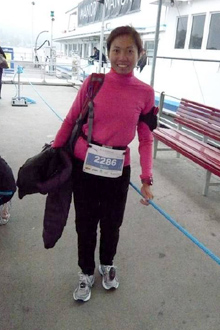 All geared up and ready to go! (Photo courtesy Sim Phei Sunn) 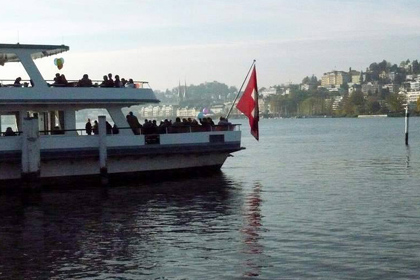 The race would start at 9:00am (9:06 for those over 4hrs). I got up at 7:00am for a hearty breakfast at the hotel. There were a number of sporty-looking guests in the dining hall, presumably going for the marathon as well. I tried to gauge the weather and spy on what they were wearing. The sky was clear, a respite from the foggy wet weather in the past days.

A quick stroll to the railway station and I boarded the cruise with many other runners. A few wore short tights, but the majority were in long tights with a light wind breaker. I was wearing a most un-photogenic combination of double tops and bottoms - a bright pink long-sleeved top over another, and navy blue tights over black longs.

The cruise reached the opposite shore at the starting area near the Museum of Transport (Verkehrshaus). I was almost late, and still had to find the bag deposit tent. After wasting 10 precious minutes on a futile search, I desperately approached some race officials. It was 2min to race time, and Swiss punctuality was renowned. I was all ready to simply dump my bag somewhere and head off. Seeing my angst, one of the officials found me some public lockers at a nearby theatre, and even paid the CHF2 locker fee for me – merci! 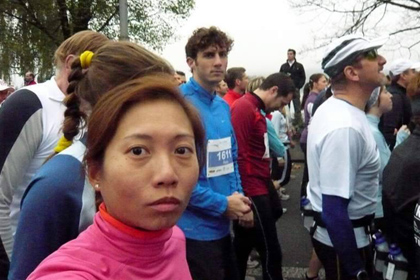 I joined the start line, surrounded by what looked like the half-marathoners. There were only a handful of full-marathoners around, so I guessed the main pack had already been flagged off. The clock stated 9min as I crossed the starting mats.

What a carnival it was! The small touristy town of Lucerne had come to a standstill as the marathon closed off roads in the main section of the town centre. Crowds lined the streets and supporters made a party out of the event. Everywhere we ran, there were many people cheering "Hoppe-hoppe" or "Super". The marathon route was a 2 x 21km loop that took us around the bank of Lake Luzern, major landmarks, and into the scenic neighbourhoods of St. Niklausen, Kastanienbaum, and Horw. The average Luzern altitude was 400-500m asl, and the course was relatively flat except for 2-3 sections that had rather steep and long rolling hills. 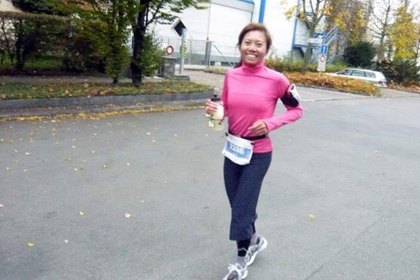 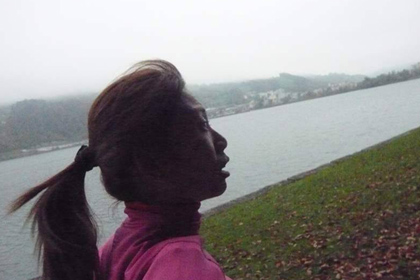 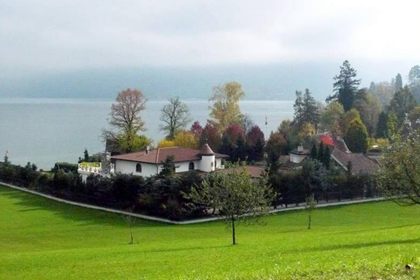 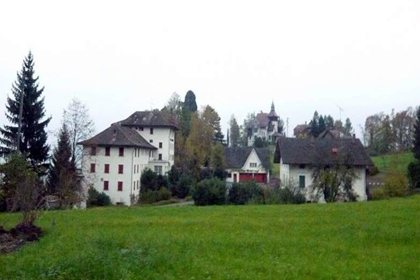 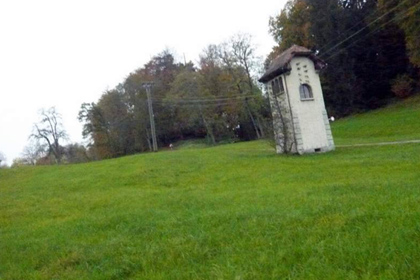 Twenty-one musical bands lined the route (almost every kilometer) and added to the festive cheer. The bands ranged from a traditionally-garbed formal ensemble to recreational groups that were jamming together for a fun time. I ran with a bottle of Endurance drink and power gels in one hand, and my camera in the other. I was constantly distracted by the bands and scenery, pausing ever so often for quick snaps. I must have taken about 2-3 shots per kilometre!

There were 3 race categories - Marathon (full), Halbmarathon (half), and Schnupperlauf (13km). The cut-off times were 2:45h (21km mark), and 5:30h (42km). I had eased off running for many weeks following a knee injury, and the longest I did was 2h a week before the race. And I paid the price today with unconditioned legs. The first 5km were a breeze, high from the excitement and relatively fresh legs. But the Swiss and Europeans were strong runners. Even old ladies trotted along steadily and faster. Many people ran in organized teams and clubs. I spotted a group of T-shirts that read "Desperate Housewives. For Charity"! I ran ahead of the 4:30h pacers (they were called "pacemakers" and carried a bunch of blue balloons), and chugged up the unexpected slopes. But by 10km, the balloons were in front of me and I felt tired. We crossed the finishing mats for the Schnupperlauf, and I eyed them with envy. By 15km, I was low on sugar and my nose was constantly running. I was perpetually hungry and the power gels did not help – perhaps it was the cold coupled with my unconditioned state. Thankfully the aid stations were well-organized and stocked with water, Endurance drinks, bananas and cut-up pieces of Powerbar. 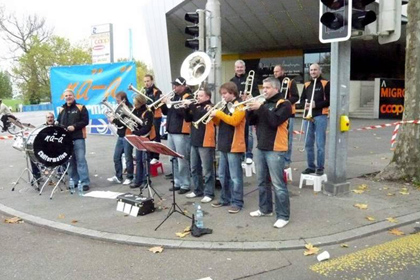 Posing with one of the musicians. (Photo courtesy Sim Phei Sunn) 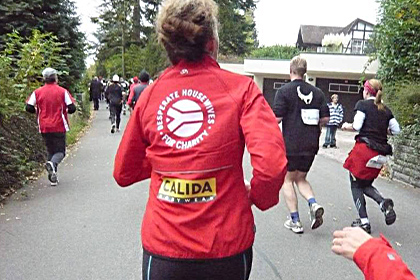 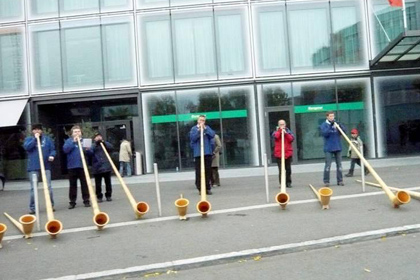 Of course there were some funny looking bands. (Photo courtesy Sim Phei Sunn) 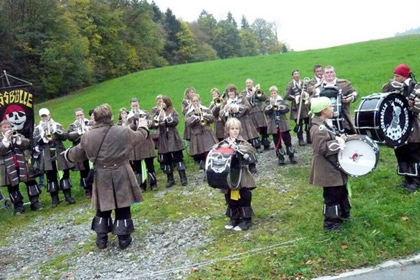 As I neared 18km, the 3h-ish marathoners were already coming in the opposite direction on their second loop. Running into the u-turn zone, the men's podium winners came up behind me in around 2:30h. I u-turned with an English girl who instantly identified my Singaporean accent (having studied in Singapore before) and we ran together for a while. The women's champion returned around 3:00h as we headed a distance into our 2nd loop. We were amongst the last few in the full marathon, and the streets were quieter now. However, kudos to the encouraging supporters in the 25 - 35km zone, who were clearly enjoying their parties in the nice sunshine. Each time a runner ran by, they would smile broadly and shout Hoppe-hoppe in earnest. Mothers pushing prams would stop and cheer, little girls perched on their daddies' shoulders joined in the shouting, old couples flashed genuine smiles and clapped along. Most of the bands were resting, but as each of us approached, they would drum up a few notes to keep the cheer going. The festive mood was awesome. Each time I pointed my camera at them, the supporters would be momentarily surprised before posing gamely. 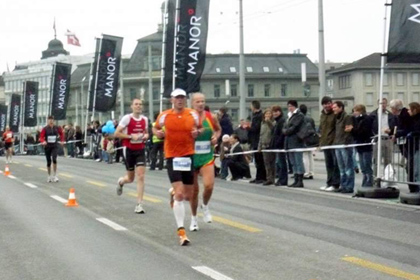 The elite runners came running on the other side. (Photo courtesy Sim Phei Sunn) 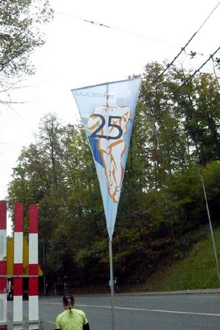 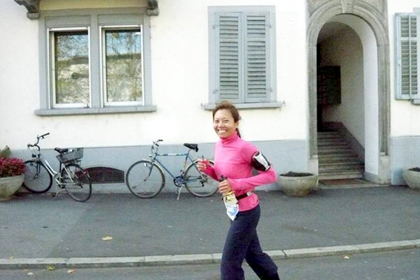 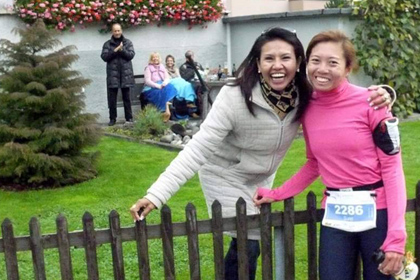 Despite the cheering, it was a painful run for me, both physically and mentally. I was hungry, cold and miserable. My legs were aching and almost cramped by 30km. I stopped many times to walk. Suddenly at 33km, I spied a convoy of bicycles riding slowly behind me. I thought they were cleaning the streets of discarded cups. Then it dawned on me that they deliberately stayed back and were escorting me! Unlike the podium finishers who each had one cyclist with a flag stating their rankings (1, 2, or 3), I had a group of 6-7 bicycles merrily chatting away behind me, and even an ambulance! I was very tickled and started taking photos. One of the cyclists took my camera, rode ahead and snapped pictures of me on the run. Then another held on to my camera and promised to take my finishing shots, urging me to keep going in the last 3-5 km. It was pressurizing though, to have so many people staring at my back. 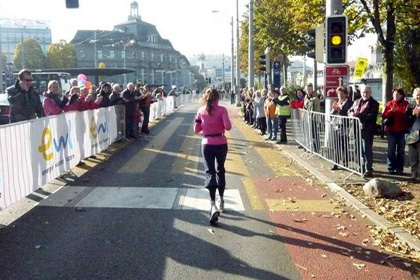 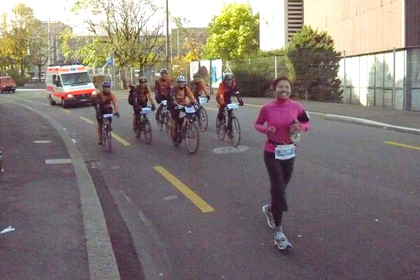 Being last (or nearly last) had its privileges. As I alternated the last spot with another guy, the bicycles faithfully kept their distance behind the last runner. The finishing line seemed so far away. At 38km, they fed my bib number to the main control, and I kept hearing my name over the public speakers. I did not understand the announcements though I did hear the following – my name mispronounced and in the wrong sequence, “Singapore” and “Welcome to Lucerne”. As I neared the finishing mats, a guy with the finisher medal grabbed my hand and ran with me across the line with raised arms. I think I was the last or 2nd last to make it under the cut-off time. The (rather good-looking) guy introduced himself as the Vice-President of the marathon organizers, and had me shake hands with the President as well. 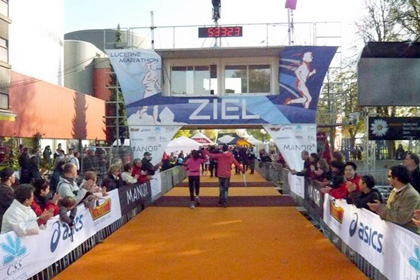 I posed for a shot on the finishing bridge, kissing my hard-earned medal. The Lucerne Marathon was a race that eventually ended well, for all the wrong reasons. Now, pardon me while I hobble around on a bad knee for the next few days. 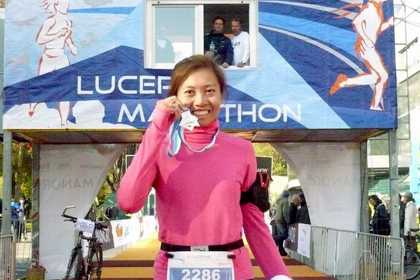 Posing with one of the cyclists who accompanied me down the final 10km. (Photo courtesy Sim Phei Sunn) 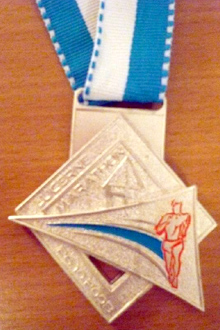 Sim Phei Sunn is a civil servant in her 30s whose recreational pursuits include endurance sports and mountaineering. She was in Lucerne for a work-related conference and signed up for the Lucerne Marathon. She actually disliked running when she was in school and only started running after university.

Editor's note: Do you have a favourite running route in Singapore? Would you like to share that experience with readers? Feel free to share it by emailing me at lesATredsportsDOTsg.