3 captains in 3 games – who’s going to be the next captain for the Singapore national football team? 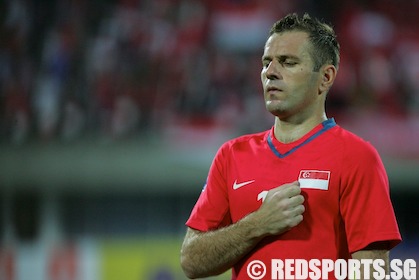 Mustafic Fahrudin has played 41 times for Singapore and captained Singapore in the game against Cambodia. He did not wear the armband in the next game against Myanmar and was on the bench against Indonesia since qualification for the semi-final was secured. (Photo 1 © Les Tan/Red Sports)

Before the first ball was kicked in the ASEAN Football Championship (AFF Suzuki Cup), the question was, “Who would captain the Singapore national team?”

The usual captain, Indra Sahdan Daud, was not in the starting lineup, having lost his place to the starting pair of Aleksandar Duric and Agu Casmir. The guess was that goalkeeper Lionel Lewis would take the captain’s armband but when the names were flashed on the television screen before the start of the game against Cambodia, it was Mustafic Fahrudin who had the letter ‘c’ next to his name.

An able midfielder who protects his backline with minimal fuss and who plays consistent, rock-solid football, the choice of Mustafic was a respected one.

The next game against Myanmar however produced a surprise. Instead of Mustafic as captain, Noh Rahman was now made captain.

This was odd. Mustafic, 27, had played well in the game against Cambodia. There was nothing he did on pitch that suggested he made a bad captain. Replacing a captain for no apparent reason stood out.

Noh Rahman played a decent enough game against Myanmar but he has never been known as team captain material for the national team. He is an even-tempered player but does not communicate much on the field. The choice of him as a captain was strange.

The third game against Indonesia saw Indra start with the captain’s armband. Duric was out with a fractured fibula while Alam Shah was struggling with a hamstring injury.

It is not clear that Indra will start in the next game against Vietnam in the first semi-final in Hanoi on December 17th. The likely starters up front are Agu Casmir and Noh Alam Shah based on present form and ability.

So the Singapore team has seen three captains in three games.There have been no official statement from the Football Association of Singapore as to why there have been so many changes in captaincy.

With 41 caps, Mustafic is now a seasoned, experienced player. For consistency, ability and temperament, Mustafic Fahrudin is the best choice for captain. 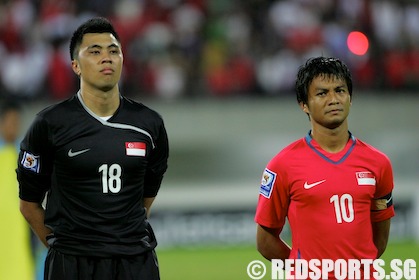 Indra Sahdan Daud (right) captained Singapore in the final group game against Indonesia, his first start in the championship. Some were expecting Lionel Lewis (left) to be made captain in the first game against Cambodia but the armband went to Mustafic Fahrudin. (Photo 2 © Les Tan/Red Sports) 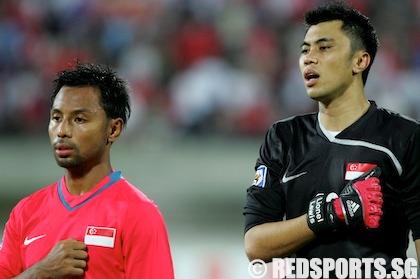 Noh Rahman (left) captained Singapore in the game against Myanmar. He did not wear the armband in the next game against Indonesia. (Photo 3 © Les Tan/Red Sports)

Who should captain Singapore in the 2008 AFF Suzuki Cup?