Hitting the (human) wall at the Singapore Marathon 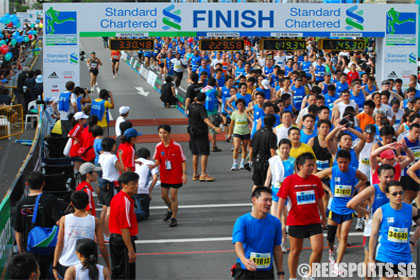 The 21km and 10km finishers (right) throng the finish line like a day out on Orchard Road while the 42km marathoners get a much more pleasant finishing experience. (Photo © Vanessa Lim/Red Sports)

Marathon runners had to contend with more than just hitting the physical wall last Sunday in the Singapore Marathon. They had to cope with running into the human wall as well.

The 12,393 runners who finished the 42km marathon hit the half-marathon (21km) runners from the 31km mark onwards, and then felt the full force of the 10km crowd at the 39km mark.

The Singapore Marathon sees the three categories (42km, 21km, 10km) converge on the same route. By contrast, the organisers of other city races like the New York Marathon (39,000) and the London Marathon (35,000) only lay on the 42km race.

Elite runner Vivian Tang, Singapore’s fastest female marathoner in 2 hours 56 minutes, had to cope with the crowd too.

“The worst was when we merged with the 21km runners after 32km,” said Vivian. “Getting drinks was a bit difficult. A bit of zig-zag. But I told myself not to get upset and just concentrate.”

A runner in the sgrunners.com forum, la senza, wrote: “A race that allows the merging of the 3 categories at that critical mark of the race can never be considered as ‘well organized.'”

However, a more experienced runner on the forum, gentle, had a longer perspective.

“My first marathon was (the) singapore marathon in 1992 – long before the SCSM we know today. I’ve seen and experienced the progress of marathon scene in singapore, and must say that SCSM has improved over the years, and i really thank them for bringing the race to the high standard today.

This year’s problems were notable – long queue at expo, no t-shirt size, congestion for 1000+ runners. I believe the organisers will do better next year!”

N.B. The event is also known as the “Standard Chartered Singapore Marathon”.

For all running-related stories go to: running