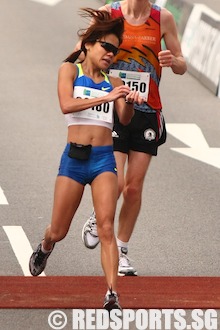 The Padang, Sunday, December 7, 2008 – The minute she started jumping up and down, something was up. The last time Vivian Tang finished a race, the Women 10K, she was exhausted, head down, and muttering about being slow (it turned out the 10km was 400m longer).

But this time, she still had enough energy, after 42km, to do a little jig. A quick glance at the clock explained it – she had broken her personal best (PB) with a new time of 2:56:27.

“Last year, halfway (into the race), I was quite tired. This year, I felt quite good. My second half was faster than the first half,” said Vivian, 38, after the race.

“I was quite happy at the 30 plus kilometre mark. Anne (Qi Hui) was leading up to 21km and then I overtook her. I was wondering, ‘Should I overtake her now or later?’ You don’t run at ease when you’re leading. I ran with her for about 1km. Then decided to speed up.”

Anne Date, coming off an outstanding 2008 Berlin Marathon time of 2:50, was expected to finish under three hours.

“We were in the same running pack for 1-2km at the start,” said Vivian. “After that, she disappeared!” Vivian only caught her at the 21km mark.

However, Vivian didn’t go into the race thinking of beating anyone. It was all about her personal best time with 2:55 still something of a holy grail for her to achieve.

“I wanted to do my PB. The position not as important as a PB. Even if I finished second to Anne, time is more important,” said Vivian.

The role of pacers came into play for Vivian in the race.

“The worst was when we merged with the 21km runners after 32km. Getting drinks was a bit difficult. A bit of zig-zag. But I told myself not to get upset and just concentrate.”

Her family also had a little mini-race of their own as they had to move from point to point to cheer her on.

“My parents, sis and brother-in-law were supporting me at 37km (Lavender MRT). They had to take the MRT to get to City Hall to see me at the Finish Line. My sis ran and saw me finish, my parents didn’t see me finish!” 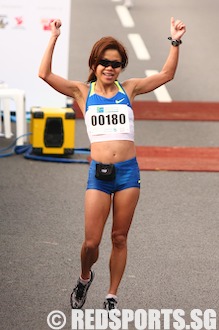 An elated Vivian does a jig at the end. (Photo 2 © Lai Jun Wei/Red Sports) 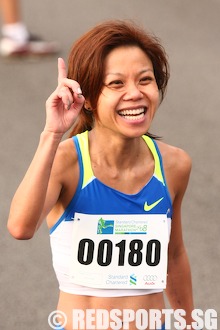 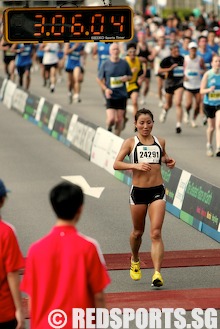