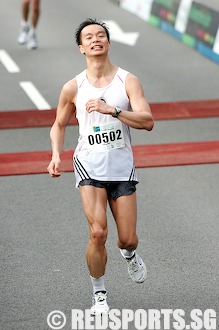 The Padang, Sunday, December 7, 2008 – Dr Benedict Tan, 41, finished the 42km marathon this morning at the Singapore Marathon in a personal best time of 2 hours 56 minutes 20 seconds to complete his transformation from Asian Games gold-medallist sailor to one of Singapore’s best marathon runners.

Daniel Ling, 31, the fastest Singaporean at last year’s marathon with a personal best time of 2:49, finished second this year behind his training partner and mentor Rameshon. Daniel clocked 2:54.

While M. Rameshon and Daniel Ling have featured in the top ranks of marathon races in Singapore, the surprise was in seeing Ben Tan coming across the line as the third-fastest Singaporean finisher.

This is a major transformation from his first marathon six years ago at the 2nd Link which he ran in 5:35 without any preparation whatsoever, “just to test my mental strength,” said Ben after the race.

Weighing 78kg at the peak of his sailing days, a slim, trim and lean 62kg Ben said, “I was never a runner. I had no foundation in running.”

But he was quick to acknowledge that he got this far because of teamwork, a strange notion indeed in such an individual sport.

“When I started with MR25, they provided a structured support. My 38km Sunday runs, I can’t run alone! Training partners are important. Lua Choon Huat trained with me.”

Six weeks ago, Ben clocked 3:01 at the Berlin Marathon, capturing the attention of Rameshon.

“Rameshon invited me to train with him and Daniel Ling. Rameshon is very encouraging and open and their experience helped me to shortcut the process,” said Ben. “Rameshon taught me everything.”

After hooking up with Rameshon, Ben soon found himself training with the 18-year-old Hwa Chong Institution runners, bringing back memories of his junior college days in Hwa Chong Junior College.

“When I was a teenager, I was in awe of the track team. I couldn’t keep up with my peers in cross-country. Now I could keep up with them over 12-15km runs. I felt young again!” said the 41 year old who looks 30.

Apart from base runs of 16km six times a week and a Sunday 38km run, Ben also used his sports science knowledge to improve his running gait. “I modified my running gait to get the power and efficiency up.”

On the race itself this morning, Ben said: “I didn’t follow Rameshon at the start. Too fast! I caught up with Daniel Ling at 15km but Daniel overtook me at 21km and I didn’t see him again.”

Vivian Tang, Singapore’s fastest female marathon runner, said, “He’s fantastic! I so admire him.” Vivian has always run faster than him in the marathon but in today’s race she found herself for the first time behind Ben. “I saw him on the Esplanade Bridge and decided to catch up with him. With 250m to go, I said to him, ‘Let’s go!’ And then he turned on his turbo and ran away!”

Said Ben on the same incident, “I figured since I had led Vivian for most of the race, I wasn’t going to let her beat me in the last stretch!”

Daniel Ling, who was running with an illio-tibial injury, said of Ben: “I was getting slower and slower and Dr Ben caught up with me at the 14km mark. I almost decided to quit then but he encouraged me saying, ‘You can do it.'”

With his stunning achievement, Ben Tan has now earned himself a call up from the Singapore Athletic Association (SAA) as a national athlete, making him surely the first athlete to represent Singapore in two sports at the highest level. 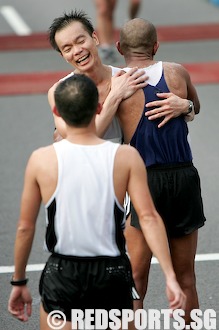 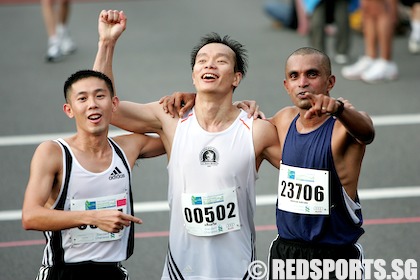 As Ben Tan continues his celebration, Rameshon points to this photographer who was yelling at them to look his way. (Photo 3 © Les Tan/Red Sports) 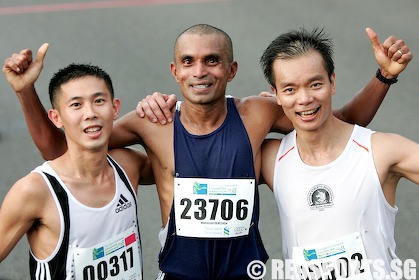 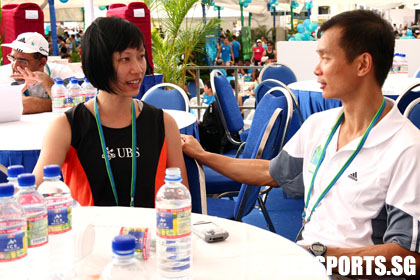