“I tried qualifying for the 2008 Beijing Olympics. And I failed.” – Rower Yeong Wai Mun

Yeong Wai Mun is a Singaporean who took the uncommon step after graduating from the Nanyang Technological University of pursuing his Olympic rowing dream full-time. He funded his own training overseas and then took a shot at Olympic qualification in Shanghai. Here is his story in his own words. 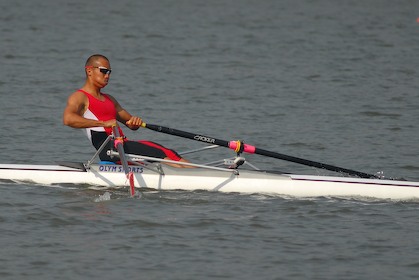 Yeong Wai Mun in action during the Olympic qualification in Shanghai earlier this year. (Photo courtesy of Yeong Wai Mun)

I tried qualifying for the 2008 Beijing Olympics.

I had no idea what I was in for as I went on my very first overseas training earlier this year. My arrival at the Sydney University was welcomed by a massive group of rowers, male and female, young and old, novice, intermediates and elites. That put my apprehensions to rest.

As I only had 10 weeks there, I knew I had to quickly get used to their routines and training cultures. I had the rare chance to see what a true rowing community is like. Everyone was involved: schools, colleges, universities, rowing clubs, parents, friends and family.

Rowing wasn't just a sport to them. Rowing was more like a culture. I was confident I went to the right place.

In all, I entered a total of six regattas while I was there. I managed to come in 1st for five single scull races, 3rd for two races and 4th for two races, one of which was during the New South Wales (NSW) State Championships.

As I left Sydney University and headed for the Olympic Qualification Regatta for Asia, I was eager to once again rub shoulders with my Asian counterparts. Without a proper training development program in the past, I could not gauge how much I had improved with the training done at Sydney University. This was my chance.

At the Olympic Qualification Regatta for Asia held at the Shanghai Water Sports Center, I was up against serious competition. A huge rise in the number of rowing countries in Asia saw 23 entries for the Men's Single Scull. Only the top 6 would qualify for the Olympics.

Almost all the other countries arrived more than week before we did. There was a development training camp organized by FÃ©dÃ©ration Internationale des SociÃ©tÃ©s d'Aviron (International Federation of Rowing Associations), which was unfortunately meant for athletes aged 25 and below. This also unfortunately meant that I only had two days to get used to the conditions.

My lack of experience was obvious. I only managed to make it into the C final. I came in 6th in that final and had an overall ranking of 18th. I could definitely have done better if I had gotten used to the course faster.

I must try to learnt to adapt to a course faster. When I was up at Penrith racing at the Sydney International Regatta Center (SIRC), it took me numerous races before I could feel myself racing the course. I clocked my best times at the last regatta after five races in a day. I didn't have that luxury in Shanghai.

Despite the failure, the experience that I took from this season was worth more than anything. I knew that I had to work more on my physical toughness. Training with the Sydney University boys gave me a clear benchmark of how hard I had to work.

Another area where I had to buck up on was my boating skills. I struggled a bit with the constantly changing wind and water conditions at Shanghai. I was also less skilled compared to the other international oarsmen.

I felt that I had achieved decent results at the international level competition after just months of being in the sport. Rowing with Alan Bennett and Sydney University showed me what rowing is really all about and that the sky's the limit. The massive improvement physically, technically and mentally was a huge confidence boost for me.

With the current lack of rowers, a coach and a proper long term training developmental program in Singapore, I still hope to return to Sydney to train. In my short stint at Sydney, I improved and learnt so much more.

Despite my wish to return to Sydney to train, I have financial difficulties as I had to fund my overseas preparation from my own pocket. In addition,I have gone without work for an entire year and my savings have almost run dry.

As of now, my plan is to find a job which will still allow me some training time during this off season. Until I am able to find some form of financial assistance, I will probably stay in Singapore to work on improving my physical strength.

With the Youth Olympic Games coming up, there are hopes that my team mate Elsie Lim (national rower) would succeed in starting an initiative to develop the sport. With that, hopefully a good solid long term training development will be put in place.

I will also be researching and planning a proposal to seek for sponsorship from a company who will hire me as an employee and at the same time recognize the benefits and qualities that come with sports and support me in my rowing journey.

Qualifying and racing in these regional games will be my top priority as these will be my benchmarks to keep me on track for the Olympic qualification regatta for Asia in 2012.

Whatever happens, rest assured that I still have my sights on being the first Singaporean rower to make the Olympic Games. It is a goal, which I believe, is highly achievable.

I would like to say a huge thanks to my coach, Alan Bennett aka AB, for putting in all his time and effort. It has been a real honor to be his athlete. His wife, Lizzi, for all the help in coaching, moral support and having the confidence in me. My teammate Elsie, for all her help, support and everything she has taught me.

To my family and relatives. Without them, I really wouldn't have a chance to pursue a dream. Their support, no matter how small it may be, is the driving force in everything that I do.

Thanks to Gay Horan, my coach for the last month of 2007, for all the advice and encouragement. It was her who convinced me that I should put myself out there and tell my story.

Thanks to Celine for having the confidence in me and helping out with my finances.

Thank you Singapore Rowing Association for their support.

Last but certainly not the least, to all my friends, including the new ones I have made in Sydney! To the huge Sydney University Rowing family, especially everyone at SUWRC, you guys were amazing!

And lastly to those who have dropped a comment to show their support. Your words mean a lot to me.

I tried qualifying for the 2008 Beijing Olympics.

And I will try again. 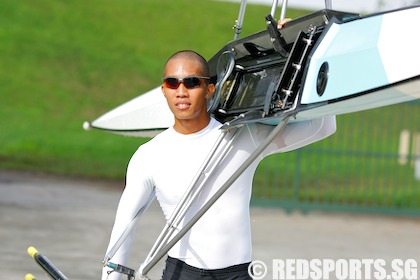