“It was a tactical loss” – national football coach Raddy Avramovic 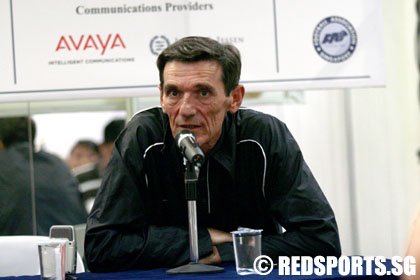 Jurong East Stadium, Wednesday, November 26, 2008 – Defending Asean champions Singapore were held to a 2-2 draw by Vietnam in a friendly game last night. Although the Singapore team went on to win the game on penalties, the way the team conceded both goals rankled coach Raddy Avramovic.

Vietnam played with a cohesion of a team that had trained together for a long time, unlike the Lions who only came together four days ago for centralised training after a long S.League season.

The players also didn’t have that freshness, coach Avramovic pointed out. They didn’t have the energy to run on for return balls after their passes.

When asked about his first XI, he said, “I already have my first eleven in mind long time ago. Tonight was to give more players a chance to see if they can take the place of the first 11 because you need 15 players for a tournament.”

He pointed out that Aleksandar Duric and Agu Casmir played well together even though they were new to each other as an upfront pair. He also acknowledged that it was difficult for Indra Shahdan in his new position on the right side of midfield.

Related stories:
Who should be in the first XI for the national football team?
Singapore held to a draw by Vietnam over 90 minutes in warm up for Asean Championship
National footballer Qiu Li gets tackled from behind by new FIFA law