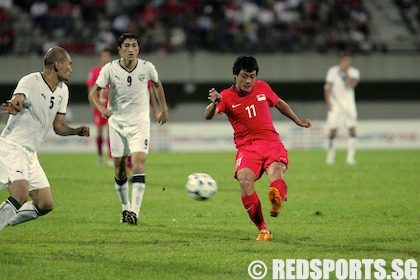 Qiu Li lets fly a thunderous shot that came off the post in the game against Uzbekistan. He won’t be able to wear Singapore red until 2010 after FIFA made its controversial ruling. (Photo © Les Tan/Red Sports file photo)

Qiu Li, a China-born Singapore citizen, will not be able to represent Singapore in the upcoming ASEAN Championship (or AFF Suzuki Cup).

The Federation Internationale de Football Association (FIFA) declared that Qiu Li did not satisfy the new five-year residential requirement that the FIFA Congress passed on May 30th, 2008.

Qiu Li had received his Singapore citizenship on May 5th, 2008, and then went on to play for Singapore in a FIFA-sanctioned friendly against Bahrain on May 28th, 2008. He also featured in three World Cup qualifying games after the Asian Football Confederation (AFC) declared him eligible.

In a statement to the Football Association of Singapore, FIFA said: “Please remain assured that we do understand that the player, Qiu Li, and the Football Association of Singapore may feel dissatisfied about the situation regarding the player in question, however, only a strict application of the amendments to articles 15-18 of the Regulations will safeguard the principle of equal treatment of all members of the football family.”

Now that FIFA has declared Qiu Li ineligible, the AFC has had to toe the line and ban him from appearing for Singapore in the upcoming Asean Championship.

Followed to its logical conclusion, this means Singapore fielded an ineligible player for three of their World Cup qualifying games.

Qiu Li has been replaced by Mustaqim Manzur but coach Raddy Avramovic will miss the option of having the muscular forward player who made things happened every time he came on as a substitute in the few games he played for Singapore.

National Coach Radojko Avramovic said, "Qiu Li had made his debut for us in an official FIFA-sanctioned ´A' international against Bahrain on 28 May with that result counting towards official FIFA world ranking points. I think this has been very confusing. What I do not understand is how in May, AFC had sent us a letter to confirm his eligibility and now in November they send us another letter to deny his eligibility based on a technicality.

"After losing Hariss, Fazrul and Amri, Qiu Li is another big loss as he means a lot to this team. From now, it is up to the other players to take the step up and do more and compensate for the absences. There is no point thinking about the players who will not be with us. This is the reality and with the players we have, we must rely on our strong teamwork and do our best for Singapore."

The new five-year residency requirement is part of FIFA efforts to reduce the number of instant citizens playing for their adopted countries in double quick time. FIFA president Sepp Blatter had previously raised this issue of naturalised Brazilian footballers playing for other countries.

“If we don’t stop this farce, if we don’t take care about the invaders from Brazil towards Europe, Asia and Africa then, in the 2014 or the 2018 World Cup, out of the 32 teams you will have 16 full of Brazilian players,” said Blatter according to the BBC.

“This is a real, real danger. Two years is definitely not enough. In Brazil there are 60 million football players; every third person kicks the ball.”

The Singapore national team is essentially a club team in the way that the best talents are picked to play regardless of where they were born. National teams of course require citizenship and so the FAS have brought some players through on the foreign talent scheme.

John Wilkinson and Aleksandar Duric applied for Singapore citizenship on their own outside of that scheme because they had decided to make their life here in Singapore.

Daniel Bennett was born in the United Kingdom and moved to Singapore when he was two. He grew up here while attending international schools and became a Singapore citizen in 2002.

Related stories:
"It was a tactical loss" – national football coach Raddy Avramovic
Who should be in the first XI for the national football team?
Singapore held to a draw by Vietnam over 90 minutes in warm up for Asean Championship