What is handball all about? 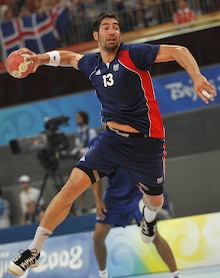 You're standing on a court, surrounded with players, waiting for a small object to come flying in your direction. Suddenly you see it, and you quickly run out to it and try to catch it before sprinting three more steps and throwing it with all your might. Are you playing basketball? Captain’s ball?

Handball is a dynamic sport that requires speed, strength, power, stamina, endurance, fitness and above all teamwork. Over 15 million people play the game in approximately 140 countries around the world.

It is a mixture of soccer, basketball and a few water polo tactics thrown in. Handball is one of the fastest growing sports in Northern Asia and Africa and is a featured summer Olympic sport. Handball will also be one of the sports in the Youth Olympic Games 2010.

As with most other sports, handball players need to be fit and most importantly, know how to work for the team and as a team.

Handball builds on natural human movement such as jumping, running, throwing and as such, has a relatively rapid learning curve for anyone who wishes to pick up the sport.

Tactics, strategies and problem-solving are elements that are inculcated into handball as well. A player has to be able to perform under stress. During the game, a player will have to see, estimate, conclude and act quickly.

Handball Federation Singapore (HFS) will be launching the Handball Awareness Week in December 2008. A series of certification courses, clinics and workshops in addition to a competition will be available for members of the public from 13 - 21 December 2008. In case you may be away for holidays during that period or just simply unable to spare the time, you are always welcome to join in the trials happening on every Friday at Braddell Heights Handball Court from 7pm to 10pm. There will be coaches who will assist to improve your skills or simply just to explain more on this fun and highly energising sport.

For more information on handball in Singapore, go to www.hfs.org.sg. 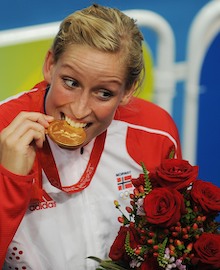 Gro Hammerseng with her gold medal after helping Norway to their first women's Olympic Handball title. Known for her fast and powerful play on the courts across Europe with her club Ikast/Bording, Hammerseng won 40% of the World Handball Magazine readers' votes in 2007. (Photo courtesy of adidas Singapore)