With 50,000 signing up for the Singapore Marathon, you might not actually be running 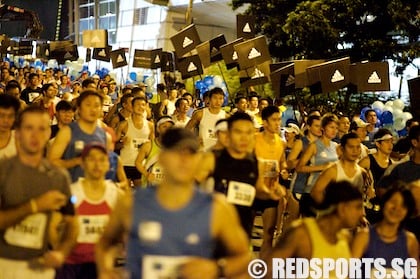 Runners at the start of the 2007 marathon. (Photo © Les Tan/Red Sports file photo)

The organisers of the upcoming Singapore Marathon are understandably over the moon that 50,000 folks have signed up to run the various distances (42km, 21km, 10km). While it will make for lovely crowd shots of packed streets, and bring in a conservative estimate of S$1.5 million in registration fees alone (assuming $30 per head), runners may end up being walkers for part of the route.

Said a reader who goes by the nickname PS on Red Sports: “It's not a fantastic experience but it's like an annual pilgrimage affair. HK stanchart marathon is even more crowded – not because the runners were slow, but the starting area had space constraint. For ours, there is (sic) enough road lanes for runners to space out or overtake. In HK, there were no options. You're simply stuck until the city road funnels to the highways.”

The New York Marathon which runs this weekend, is capping numbers at 39,000 this year. Not only that, the runners will start in three waves. There is only the full marathon category.

The New York Marathon is even thinking of hitting 50,000 runners one day to attract more tourist spending to the city, according to a New York Times story. The Chicago Marathon is now capped at 45,000 runners while the Boston Marathon limits itself to 25,000.

38-year-old Mary Pardi told the New York Times that she ran the Boston Marathon in a crowd up to the 18th mile (the full marathon is 26.2 miles) and she was “up on lawns, weaving in and out of people and wasting a lot of energy,” because the course was so packed. She finished in 3 hours 3 minutes 44 seconds, outside her goal of 3 hours.

The Boston Marathon has a qualifying time for a runner’s respective age group and attracts elite and experienced amateur runners. In 2002, 16,939 runners ran and in 2009, the numbers will be capped at 25,000.

The idea of a qualifying time for marathons has its appeal for some local runners. Said reader LV: “In 2007, I bumped into people who were actually walking during the first 5km – get this – in the 21km race. They shouldn’t even be there! Organizers should have a minimum cut-off for 21km. For example, having done 10km under a certain time or having done 21km elsewhere under a certain time.”

The London Marathon saw 35,000 runners this year and has seen 118,500 apply for the 2009 edition. Only one-third will get to run. 57,665 runners were turned away by the New York Marathon organisers this year.

It is a happy situation to have more runners than places but there is an upper limit to any event and the Singapore Marathon organisers have to date been silent on what this upper limit is, if it hasn’t already been passed. A runner’s experience is paramount and if it’s easier to run down Orchard Road on a Saturday night than at the Singapore Marathon, this will cost the event credibility as a serious running event going forward.

For those who are looking to improve their personal best times at the upcoming marathon, another reader, Renuka, had this advice.

“It is a bad idea to run it if you've trained hard to run a good time. It's frustrating and running into the back of other runners when you're most tired and need to focus is unhelpful to say the least. I guess it's fine if you're just running for fun or if you're a good marathoner because then you'll be clear of the crowds.”

Number of runners by category:

N.B. The event is also known as the “Standard Chartered Singapore Marathon” or the “Stan Chart Marathon”.