What’s a Singapore passport to most of our foreign sports talents? Nothing more than an exchange of services. 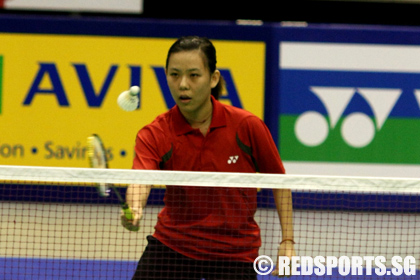 Gu Juan in action during this year’s Singapore Badminton Open. The Red Sports crew is disappointed she went home, especially after taking so many pictures of her. Our photographer is broken hearted. ): (Photo © Lai Jun Wei/Red Sports file picture)

A TODAY report (10 October 2008) earlier this month highlighted that two more foreign-born shuttlers have quit the women's national team. Naturalised citizens Zhang Beiwen and Gu Juan left the Singapore Badminton Association (SBA) in April and July respectively. The two 18-year-olds, who received their citizenship papers in May 2007, were part of the national youth team that won a bronze at the 2007 World Junior Championships.

The TODAY report cited sources as saying that Gu and Zhang quit because they felt the women's singles chief coach Wang Junjie was focusing only on Li Li and Xing Aiying, and felt neglected.

The decision by Gu and Zhang to quit the national team means that four naturalised citizens have now left the squad midway through their playing careers. The other two are Xiao Luxi, who went back to Fujian province in China in 2004 and has never been heard of since, and Li Li who quit in January this year. (Note: Liu Fan, another naturalised foreign-born shuttler, quit in May 2004 but returned to the national fold three months later.)

For sure, Gu and Zhang's departures will simply serve to add fuel to the raging public unhappiness about the Foreign Talent Scheme, cast a new dark cloud over the motivations of foreign-born national athletes, and further distance the public's sense of (dis)connection with them.

But honestly, this is what happens when the red passport and pink identity card are used (and abused) as carrots to get talented foreign-born athletes to represent Singapore in sports.

When the two most important symbols of Singapore citizenship are offered as a means to an end, instead of being an end in themselves, the foreign-born athlete's decision to become a Singapore sportsman is, in turn, nothing more than a mere economic transaction and exchange of services between him/her and his/her national sports association.

It is based not on a genuine desire to become a Singaporean and to embrace the Singapore way of life, but rather on the opportunities to compete internationally and the chance to reap handsome financial rewards from the Singapore National Olympic Council's Multi-million Dollar Award Programme.

To make matters worse, these NSAs that actively scout for foreign-born athletes don't do it on a small scale. Far from it.

Instead, they would ship in hordes of foreign-born athletes, either promising young juniors or above-average players who can't make the cut in their own national teams, into their training squads every year.

Everyone would be fed the same promise: "Prove yourself and we will give you Singapore citizenship. After that, you will stand a chance to make loads of money from representing Singapore at the various Games."

Nor are these NSAs interested in helping their foreign-born athletes to integrate into Singapore society once they get them in. For example, when the SBA first decided to house its foreign-born youth shuttlers at the Singapore Sports School in 2005, it told the School that it wasn't interested in getting these shuttlers to attend classes with the Sports School students.

Nor was it keen for the shuttlers to train alongside the Sports School's Badminton Academy trainees. Instead, these foreign-born youth shuttlers would lead separate lives and train separately from Sports School students.

That is also how mini-Chinese provinces and Indonesian townships have gradually come to be formed in the training halls of the SBA and the Singapore Table Tennis Associations over the years.

And that is probably also why, to this day, someone like Li Jiawei is still conversing in Beijing-accented Mandarin during media interviews and unable to sing the Majulah Singapura during medal-presentation ceremonies at major Games.

It's also why I am predicting that she will return to Beijing for good once her playing days are over. Hey, she's already taken the first step forward by registering her marriage to a Beijing businessman.

It's the same reason why China-born paddlers Zhang Xueling and Xu Yan readily left Singapore the moment they were no longer donning national colours, or no longer happy playing for Singapore.

Zhang even famously – and to her credit, candidly – said once in a Channel News Asia interview that she didn't know if she felt a sense of belonging to Singapore. "I found my career in Singapore so I want to thank this country, but as for a sense of belonging, I don't know," she said.

But don't get me wrong. I am not tarring all foreign-born athletes with the same brush. In fact, there are a few whom I feel a sense of connection with.

Unfortunately, you can also count them with the fingers of one hand.

Why? Well, for the first three, it's because of their original intentions of coming to Singapore in the first place.

Ronald – a highly promising youth player in Jakarta – and Tao Li – a promising province swimmer who failed to make it into the Chinese national team – came here on their own with the original intention of studying, not because they were promised Singapore citizenship in return for representing Singapore.

They were then subsequently discovered by national badminton and swimming officials after sterling performances at the national schools and national age-group championships, and encouraged to take up citizenship.

Likewise, I feel an affinity with Duric because of his original reason for coming to Singapore back in 1998 – to earn a living as a professional footballer in the S-League.

After living here for several years, Duric decided Singapore would be a good place to call home and applied for citizenship. When he was finally granted Singapore citizenship after having been rejected twice (he wasn’t on the FAS Foreign Talent Scheme), he was called up to represent the Lions.

As for Li Li, I still feel an affinity with her even though she was scouted by SBA officials in 1997 and offered the chance to earn a Singapore passport.

Why this sense of affinity with Li Li? It's because of her seeming willingness and genuine efforts to embrace the Singapore way of life.

You get a strong sense of that in her efforts to learn to speak English instead of sticking only to Mandarin, her prattling away in Singlish during television and radio interviews, her enrollment in BEST classes so as to garner some academic qualifications, and finally, in her moves to get her mother to come and live with her here.

The message she is sending out is quite clear: "This is my new home and country. I plan to stay here and be a part of it."

Unfortunately, Li Li will be the odd one out among her foreign-born peers in Team Singapore. Most of them will instead take the Li Jiawei-Zhang Xue Ling-Xu Yan route when they finally call time on their playing careers here.

And every time one of them does so, the worth of our red Singapore passport and pink identity card drops a notch. But they are not to be blamed.

Instead, the ones, in the end, who must be blamed are their NSAs.