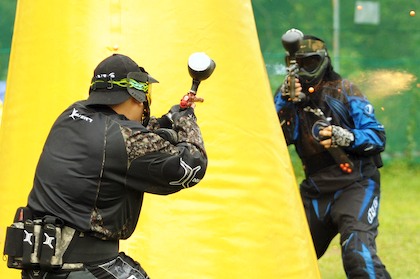 “You can see it coming…” An orange pellet flies towards its target. (Photo © Paintball Association of Singapore)

Despite not progressing past the quarterfinals, the team which comprises of Filipinos working and residing in Singapore, were crowned the grand champions due to the final tally of points accumulated over the three legs. Warfreakz were runners up in the first leg and finished first in the second leg.

Team Captain Marcus Babao, 28 said the team was delighted with the overall victory despite having only started playing tournament paintball in January this year.

"It would have been great to finish at the top in the last leg but congrats to the winners of this highly competitive third leg," he said.

Warfreakz, who were the favourites to win the third leg, also fielded a second team called PSG Bravo who also made the quarterfinals. Players in both team added colour to the tournament by dyeing their hair with the colours of the Philippine flag.

Babao said Warfreakz will take the lessons learnt from the SPNS and apply it when they participate in the Johor leg of the Malaysian Paintball Official Circuit (MPOC) to be held from October 24-26 at the Larkin Stadium. The team plans to take part in the entire MPOC season in 2009.

However, Babao stressed that there will always be a PSG team in any tournament organized by the Paintball Association of Singapore (PBAS).

"We would like to thank the PBAS and everyone involved in the SPNS for devoting so much time and effort this entire year to make this tournament such a success," he said.

Team Carnage were the toast of the third leg having finished second behind the Warfreakz in the early rounds today before beating Team Mid Life Crusaders in the final.

Carnage captain Thomas Lee, 23 said he was expecting a podium finish but did not expect to win the third leg.

"We have not had much time to train together due to our study and NS commitments but we're very happy to have won this leg and finish second overall despite only playing two legs of the SPNS," he said.

Surprise package of the tournament, Team Mid Life Crusaders, defeated the Warfreakz in the quarterfinals and Team Damnation in the semifinals.

Team captain Ann Tan, 27 said they were already making plans to pack up after the qualifying rounds as they were not expecting to progress so far.

"We're all close friends from the cigar smoking club where I work and only started playing tournament paintball in June," she said.

Third place went to Team Damnation who beat Team Wargh! Nuts in the 3rd/4th playoff. Team captain Zainudin Dollah said it was a tiring day but the end result was well worth it.

"A few of us have not had a chance to train much because of the fasting month so we're very happy with the third placed finish," said the 34-year-old who dedicated his medal to his daughter Aida who was born on 27th September.

The previous 2 legs of the SPNS 2008 were held in March and June this year. Teams can either choose to play in any leg or commit themselves to the entire series in which they will accumulate championship points to be crowned Grand Champion of the series.

The competition is a 3-on-3 format with each team comprising of three first team players and two reserve players. The field layout and rules are based on the Millennium Series, a highly popular and competitive pan-European paintball league.

Head Marshal Mr Junaidi Bin Kalil said the standard of play among the teams was very high and comparable to the novice divisions in Malaysian tournaments.

"Many of these teams should be able to hold their own in the novice divisions in Malaysia should they choose to take part," he said.

Mr Junaidi, who is the President of the Malaysia Paintball Marshalls and Head of Rules and Regulations for the Paintball Asia League Series, started officiating in 2003 and is the first Asian to marshal for the Millennium Series during the Paris World Cup 2005.

Paintball Association of Singapore (PBAS) President Jane Koh said, "We will continue to review and improve on the format of the tournament in 2009. Already in planning is a 5-man paintball tournament which will be held in the heartlands where more awareness of the sport can be created. We are also looking into introducing a category for the tournament." 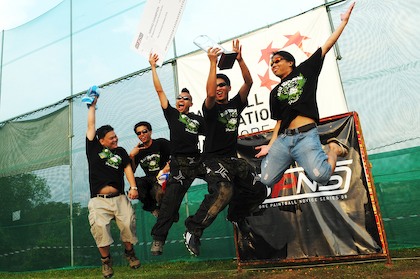