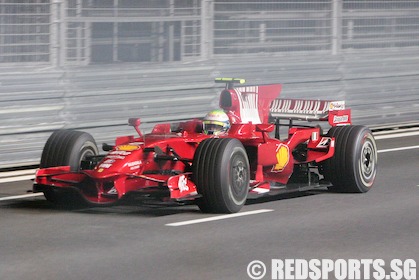 Felipe Massa of Ferrari at the Singapore Grand Prix. With a budget of USD414m (SGD591m), you’d think they would have trained enough times to remember to take out the fuel nozzle before letting Massa drive off after the pit stop. The botched-up pit stop cost Massa the race after he had started in pole position. (Photo © Les Tan/Red Sports)

Of course Formula One is a sport. But it is not your usual sport. Why? Because F1 is about money. A lot of it.

A billion-dollar sport
In 2008, the teams combined will spend an estimated USD3.073 billion (SGD4.375bn) according to Formula Money. To put that mind boggling number in perspective, the budget for our Ministry of Home Affairs (MHA) is ‘only’ SGD2.913bn, and it is a sum larger than the Gross Domestic Product of some countries. For the benefit of football fans, the revenue for the English Premier League was USD3bn for the 2006/2007 season.

Here’s a breakdown of budgets by team.

Japanese team Super Aguri pulled out after the first four races because of a lack of funding. They ‘only’ had SGD65m.

Money has played a big part in how the teams have finished. McLaren-Mercedes lead the Constructors’ Championship by one point over Ferrari. It is therefore no surprise to know that McLaren (SGD634m) and Ferrari (SGD617m) are second and third respectively on the money table. However, Toyota, with the highest budget, are doing badly, lying fifth in the constructors’ standings. But that is the exception rather than the rule.

Part of the charm of sport is to see two teams or two players fight it out and most neutral folks will go home satisfied having seen the better team or player win. In F1, you have the situation where a talented driver can win a world championship one year, and then, depending on which team he drives for the next, never see another podium finish for a long time, if ever.

Fernando Alonso is a case in point. Alonso, a two-time winner of the World Drivers Championship in 2005 and 2006, never placed higher than fourth this year until he won the Singapore Grand Prix yesterday. Did he become lousy overnight? Probably not. Is he driving a slower car? Absolutely, yes.

Canadian Jacques Villeneuve is another example. He almost won the World Drivers Championship in his first year in 1996, then won the title the next year after the cheat Michael Schumacher unsuccessfully tried to ram him off the track to prevent him from winning the championship.

However, Villeneuve made the mistake of switching teams, going to a new team, British American Racing (BAR). He sank without a trace while Schumacher found continued fame (and infamy with his unethical driving) with Ferrari.

As a a result of this imbalance, some F1 race drivers switched to the US Cart series in the past. In the US Cart series, the cars are more or less the same and driver skill is paramount. In F1, the more money you have, the better car you can build.

The tourism dollar
It tells you something that the drive to bring the F1 race to Singapore was spearheaded by our Ministry of Trade and Industry (which, by the way, has an operating budget of SGD2.52bn, SGD1.855 less than the combined spend of the F1 teams), with the Singapore Tourism Board playing a major role.

With close to 50% of the 100,000 racegoers from overseas, the Singapore Grand Prix was from start to finish a tourism project, a motorsport project a distant second. If the F1 was about 20 elephants running around a track to see which would finish first (imagine an elephant pit stop) and had a global television audience of 597 million fans (the F1 global audience), we would still have brought it in.

Sport for the well-heeled?
The $168 walkabout tickets are not value for money. You are not elevated enough trackside to see anything of consequence, just fleeting glimpses of the drivers going past. If you forgot to bring ear plugs, your naggy boss with the bad jokes should henceforth be a thing of the past.

But ah, if you were in the suites, enjoying the $7,000 per head buffet courtesy of OCBC Bank (there were ‘cheaper’ suites at $1,388 per head), then you would have eaten enough for a small African village with waiters serving you hand and foot and live television feeds to tell you what’s going on while you look out of your air-conditioned suites at the masses sweating it out in the humidity trackside.

The lack of interest island-wide was noteworthy but not unexpected. Most coffee shops in the HDB estates were tuned to the English Premier League, a more familiar sport. But certainly, they were not the target of this race.

If we remember that this F1 race was to put Singapore on the global mind map positively, then it should be considered a resounding success. Millions of foreigners would have seen Singapore on television looking fantastic, a gleaming Pearl of the Orient. Whatever that triggers in the European mind, as long as it makes them get on a plane and visit us next year for longer than 3.3 days (the average time a tourist spends in Singapore), and spend more than the average tourist, the Singapore Grand Prix would have done its job.

And you’ll be ok as well as long as you remember one thing – just don’t spend your own money on F1. 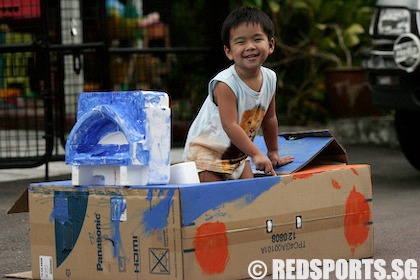 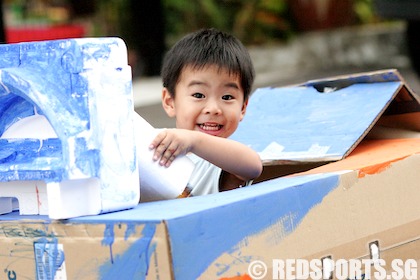 Despite driver enthusiasm, budget constraints (and the lack of a real engine) meant we were not F1-competitive. (Photo © Les Tan/Red Sports) 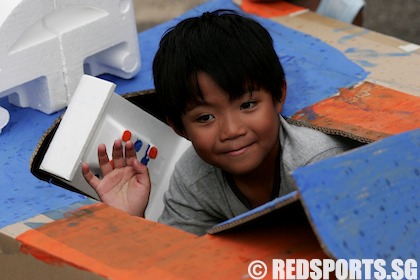 A Red Sports mechanic confirms there is no engine. (Photo © Les Tan/Red Sports)

Related stories:
Alonso ends hoodoo in sundown Singapore
Massa wins fight for pole in Singapore
Only at Formula One…
F1 drivers: "Singapore has the bumpiest track”
Watching F1 live is…boring
McLaren-Mercedes and Ferrari shine while Toyota fail to make mark in first practice session
5 reasons why the F1 is like the US financial crisis
Singapore Grand Prix: Paying to jam ourselves
Scalpers find few takers for Singapore Grand Prix tickets at eBay with two days to go