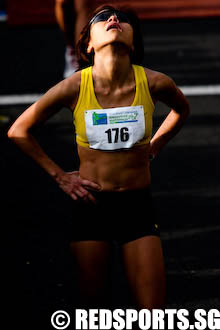 Vivian Tang was Singapore’s fastest woman marathoner at the recent 2007 Singapore Marathon, finishing the race in a time of 3 hours, 1 minute and 17 seconds. Having known Vivian since 2004, I did a double take when I saw her name spelled as “Vivien” in the official website of the Singapore Marathon as well as in the newspapers.

“There was one year when I became Vivian Tan. Every year I tell the SAA, the reporters and the organisers the same thing. V-I-V-I-A-N, T-A-N-G,” said Vivian at our lunch meeting.

However, Vivian takes it all in good humour and shows no rancour. I asked her what she has been doing since the December 2 Singapore Marathon. “No running, zero!” she said, as we tucked into Vietnamese beef noodle soup at Holland Village. She can obviously afford the break after a year of training, of getting up at 5 a.m. on weekdays, 4 a.m. on Saturdays for long 20-25 km runs and 6:30 a.m. on Sundays for shorter 10-12 km runs. All that on top of the evening sessions after work. “I do most of the training alone during the week. It’s just more convenient,” said Vivian who draws up her own training plans without a coach.

You look at Vivian now, all 42 kg of lean muscle and you find it hard to believe that she used to weigh 48-50 kg. “I stood in front of the mirror one day in ’92 and said ‘Eww … gross! I am fat, I better run.’ That’s how I started running.” After much cajoling, she finally relented and gave me a picture of herself weighing 50 kg. “I never ran on the road before and so I just ran ten times around the track,” said the former St Anthony’s Convent and CHIJ (Toa Payoh) school runner. Vivian competed in the 100m, 200m and 400m sprints. “I was fastest in CHIJ, but I got eliminated in the heats at Nationals. We felt like jailbirds in CHIJ because the school was so ugly! But at least it had a track.”

Her personal best stands at 2 hours 58 minutes set at the Berlin Marathon in 2006. “It was 22oC, unnaturally hot for the Europeans but great for me.” The fastest she has ever run in Singapore is 2:59 and her holy grail for the last three years has been to run 2:55. “I was told that running overseas would shave off quite a bit of time but it never did for me.” I put it to her that it only makes a difference for lesser mortals and not elite athletes like her and she laughs good-naturedly. “I think the 2:55 is realistic but it’s so frustrating that I cannot hit it.”

Born in 1970, Vivian has two older sisters and one younger brother. “My second sister ran the GE Women 10K in about 50 minutes and I have a nephew Ansel in Nanyang Primary who is an age-group national table-tennis player and who will also play for RI in 2008 when he enters Sec One.” I asked if her family has a running history. “No. My dad is retired and bugs my mother in his retirement,” she says. “My mom’s a housewife. I started my mom out running for a year but she stopped.”

“I don’t like running off-road,” she says when asked about her likes and dislikes. “Weather matters the most to me. I don’t like the sun because it drains me quite a bit. The Lion City marathon starts at 4:00 a.m. – that’s good!”

Despite the official mess-up with her names, some runners do recognise her. “I get random strangers coming up to me saying ‘Hi, Vivian!’ when I’m walking around during lunch,” says the self-employed remisier. “They’ll ask me what’s my next event or they’ll say ‘I saw you running where and where ….’ At the GE Women 10K, some fellow Singaporean runners would give their support, shouting ‘Come on Vivian!’ So that’s nice.”

Vivian ran for Singapore in the 2003 and 2005 SEA Games. I asked her why she decided not to try out for the 2007 SEA Games squad. “I felt I had done it already and it would make no difference to my training this year.” On Saturdays, she runs with a group called “Animiles” at Lower Peirce starting at 5 a.m. “We do at least 20 km and an average of 20 runners show up. The numbers go up into the 30s nearer the marathon!”

I asked her if she would stop running but she says “No, I’m the active sort. I’ve thought of stopping because of the pain and having to wake up early. Maybe if I hit the 2:55 mark I might slow down.”

So how did she get started running marathons? “I was running around the track at Evans Road and this lady, Santhra Sinathuray, came up to me to invite me to run with her group. This was back in ’94. I still run 10-12 km with her on Sundays starting at Botanic Gardens, up to Nassim Hill and back. Santhra is in her 60s and there’s another lady I run with, Arlene, who is 69, and she just ran the recent marathon in six hours plus.”

“There are too many events in the second half of the year!” she exclaimed when I asked her what events she was competing in next year. “I haven’t decided yet.”

When asked about who her close friends are, she says without hesitation, “My best friends are my secondary school friends. There are four of us since IJ days. We meet maybe like three or four times a year but when we do, we can talk about anything. Obviously my friends understand that I cannot go out for dinners on Friday nights because I am knocked out by 10 p.m. so that I can wake up at 4 a.m. on Saturday.”

I asked if her job as a remisier helped in her training programme. “Yeah. The market is open from 9 to 5 p.m. I am self-employed and I can start training by 6:15 p.m.” Did she ever think of going into the sports industry? “Back then, everyone just did a business degree for practical reasons to get a job and so I just went along. But if I had a choice, I would now go into something sports-related.”

So what keeps her going? “I compete against myself. It annoys me when I set a target and can’t reach it. I’ll keep trying.”

So do remember the name, Vivian Tang, in the year ahead. And remember how to spell it too – with an ‘a’.