Editor’s note: Running is the base for all sports. A strong fitness base is built through running and that is what separates good teams from very good teams in the last quarter or last 15 minutes of any game. Our contributor for this feature is Sim Phei Sunn, a working adult who was from Nanyang Girls’ and Hwa Chong Junior College. She actually disliked running when she was in school and only started running after university.

I was in Berkeley, California in October 07 for a work conference and managed to sign up for a Golden Hills trail marathon. I have never done a trail version before, so I went with no time targets and not knowing what to expect. 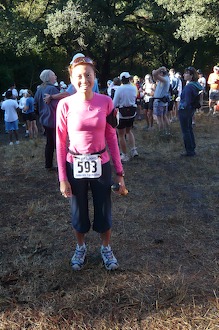 Phei Sunn at the start of the race. (Photo © Sim Phei Sunn)

As the name suggests, it is a full 26-mile (42km) route through six scenic regional parks, mostly through the hills. The trail terrain was about 2/3 uphills, and 1/3 down. Where it went up, it could be relentless for 1 to 2 miles (1.6-3.2km), with the longest uphill stretch being 4 miles (6.4km) long. It was a wonder how anyone could run continuously up those slopes. Imagine seeing Singapore's Mt Faber slope many many many times throughout the entire race. Some sections were like the very steep Kent Ridge slope off South Buona Vista Road. Similarly, the downslopes were the types that one could dash down, never mind the knees and ankles.

Ã¯Â¿Â¼
The 26-mile (42km) trail marathon was part of a longer 50-mile (80km) race. It was considered a "mini-full" compared to the 50 milers. If you visualize the route to be from Point A (start) to Point B (end), the 50-milers started their grueling run at 6.00am, doing approximately B-A-B. The 26-milers like myself started at 9.00am, from Point A to Point B. About 4 to 5 miles (6.4 - 8km) into our run, we would meet the 50-milers coming in the opposite direction. The fastest amongst them would eventually catch up and overtake us in the last stretch of our marathon. 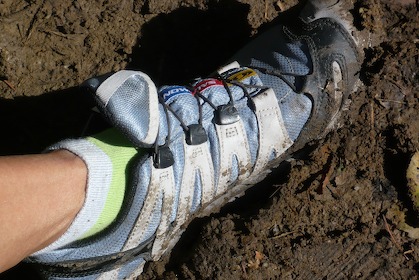 A muddy trail made it harder to run. (Photo © Sim Phei Sunn)

It rained heavily the day before the marathon, and the course was wet and muddy. Luckily the weather cleared up, with bright sunshine for race day. We had to assemble at Point B at 7.00am to take a shuttle to Point A (so that we could get to our cars that were parked at the end point after the run). In the early morning, the weather was cold. Everyone wore their tracksuits and sweaters while waiting for the race to begin. Slowly, the sun shone through and warmed the area. 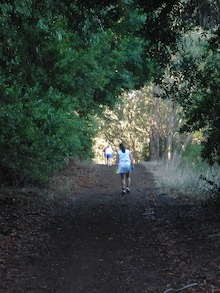 The first 4 miles (6.4km) was a muddy uphill path due to the previous day's rain. Initially I wondered why my legs were getting heavier, and my shoes felt like they were falling off. Looking down, I realized that mud was accumulating on the soles. Wet mud was picking up more gooey stuff with every step! That was a good lesson for me, as I had not experienced that in Singapore before. People kept stopping every 5 to 10 minutes to scrape mud off the shoes. It was very difficult to run as the wedge of mud grew heavier. I took about 1 hour to clear the first stretch! 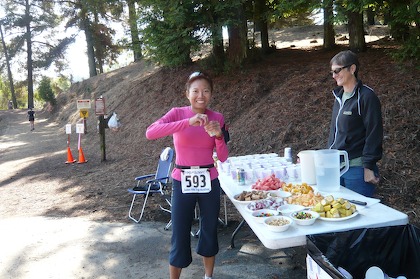 Finally I reached the first aid station (also a water point). It was like a picnic. In fact, the entire race had a carnival atmosphere. People were friendly and chatted with one another. It did not feel as competitive as some of the road marathons that I had done before. Race volunteers and officials were very helpful and encouraging.

A feast for the eyes … and stomach. (Photo © Sim Phei Sunn)

At each aid station, they would take your timing (it was a manual recording), and someone would come forward to ask if you wanted Gu-drink or water. He or she would then take your water bottle (almost everyone carried one or two bottles on the run) and fill it up for you! There was also coke available. On the tables, there would be bowls of food - M&Ms, cut bananas and honeydew, chunks of Clif bars, packets of Gu gels, cubes of brownies, jellybeans, Clif Shots (cube-shaped jelly), pretzels, peanut-butter-jelly sandwiches, and cookies! I have never seen such good logistics support for a race. I stopped for about 2 minutes at each aid station to refuel, and must have tried almost all flavours of Gu gels. It was almost sinful not to stop and check out the food spread. 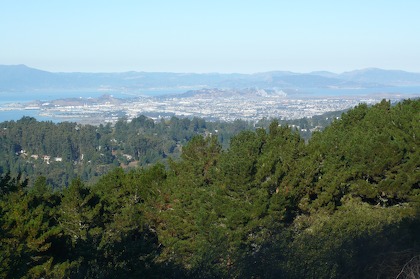 The view from the top. (Photo © Sim Phei Sunn)

Back to the run, the next couple of miles and aid stations involved rolling hills going up and down countless times. The first section was along Skyline Trail, aptly named because we were running along the ridge of a hill range, and one could see the city view on both sides of the trail. That was an exposed trail, which meant running in the direct sun. But that was good - I'm used to tropical weather after all and a little heat and light humidity improves my run. Then we went under the canopy of redwood trees, and the weather became damp and cool. 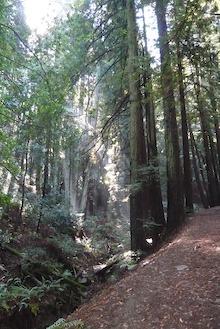 It took a lot of discipline to continue the run and not be rooted to a spot, taking in the surrounding sights. It might have well turned into a one-day hike if not for my return flight that very night. There were many stretches where one ran alone in the cool quiet of the trail marked by pink ribbons, lost in thoughts and accompanied only by the rhythm of the number tag flapping in the run. There was an incredible sense of freedom and adventure, an almost innocent child-like delight in the exploration.

Many a times, I felt like I was on a fast hike, rather than a run. On the upslopes, many people (including myself) would walk up so as to conserve energy - there were just too many long slopes to push through. My strategy was to trek up briskly, which I reckoned would be about the same pace if I ran, and managed to overtake some people. On the downslopes and flats, I would open up my strides and dash down. It was very different dashing down trails versus roads. On trails, I was usually running on soft sand or fallen leaves, which cushioned every step. There were some short sections where we ran on tarmac roads, and I could immediately feel the impact on the knees.

After a tough four hours, we were only 16 miles (25.6km) into the race! We cleared the majority of the gruelling upslopes only after 17 - 18 miles (27.2 - 28.8km). Thereafter, the slopes (still have!) were gentler or mostly downhill. Where I have always paced my runs in kilometres, it was difficult to track the route in miles. The only markers were at the aid stations, where they would indicate current distance and distance to the next station. After a while, I gave up trying to convert the distances. Psychologically too, it was easier to count down 26 miles, rather than 42 kilometres. However, it also meant that I was unable to gauge when I might cramp, or Ã¢â‚¬Ëœhit the wall'. Thankfully, I managed to avoid both - almost. 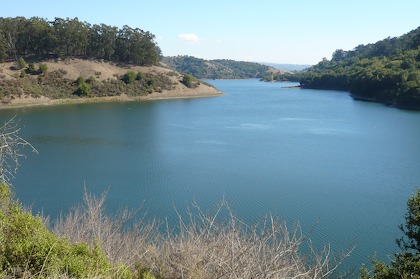 The last aid station was 3 miles (4.8km) from the end point, so I thought I could have a strong finish. Alas, shortly into the stretch, an upslope and more! By that time, the 50-milers were beginning to overtake me. I was full of admiration for them, still going strong after such a long distance and time. Then I saw Lake Chabot open up beautifully in front of me, which indicated the end was near. 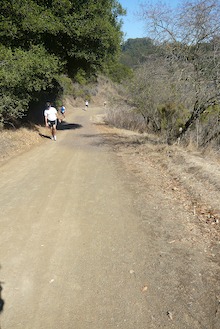 The last 1 mile (1.6km) was on tarmac road, and by then, every pounding on the hard surface was amplified in the knees. I tried to sprint, but the legs would not go. I was even overtaken by a lady 10 years my senior.

Finally, I made it to the finishing area. One could hear the cheers and claps even before reaching it.

The end point was a party in itself. There was a huge BBQ pit churning out burgers and hotdogs of giant sizes, pasta, salads, fruits and desserts. Drinks were free flow. Many supporters came with families and dogs to meet the runners, and people were lounging around the picnic area, chilling out on a nice warm Saturday afternoon. 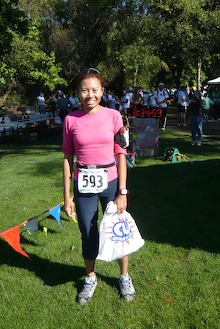 Editor’s note: Do you have a favourite running route in Singapore? Would you like to share that experience with readers? Feel free to share it by emailing me at lesATredsportsDOTsg.