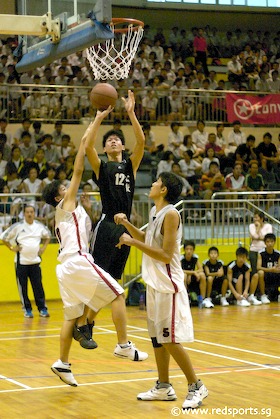 Both teams started tentatively, and it took two minutes before Goh Yao Ming of Presbyterian High opened the scoring. It was as if both teams were testing each other out before going in for the attack. The first quarter ended with Presbyterian High leading by 9-7, but the key talking point was the three quick personal fouls picked up by Russel in that quarter alone.

That was to prove crucial as Presbyterian High’s coach Liu Tong decided to sit him out for the second quarter. Sensing an opportunity, Catholic High attacked through their centres Goh Kong Tat and Benny Lam, standing at 1.91m and 1.88m respectively. This worked close to perfection as Benny Lam sparkled with 10 points in that quarter alone. Presbyterian High forwards struggled to cope with the physical strength and height of Kong Tat and Benny.

At the same time, suffocating man-to-man defense was applied by Catholic High, with captain Jabez Su paying particular attention to Goh Yao Ming. This resulted in numerous turnovers by Presbyterian High. Although Russel Low came on again late in that quarter, the damage was already done as Catholic High raced to a 30-20 lead by the half, outscoring Presbyterian High 23-11 in that quarter alone.

Russel Low began to show what a key role he plays in the Presbyterian High team when he scored 12 of his team’s 17 points in the third quarter as Presbyterian High tried to close the gap. On the other hand, Benny Lam continued to show his rich vein of form as he replied with 6 points in that quarter, with Kong Tat adding 4 more. This battle of the centres had the crowd enthralled.

A major turning point came in the fourth quarter when Catholic High’s Benny Lam fouled out with more than six minutes to go! Catholic High immediately felt the effects as Presbyterian High closed the gap with Russel leading the way. Despite the loss of Benny Lam, Catholic High found new impetus in the form of point guard Dominic Lim who calmed the team with his steady nerves. His no-look pass resulted in a three-pointer by Edmund Tan to extend Catholic High’s lead to 51-46 with three minutes to go. Another pass from Dominic to centre Sathy for two followed by a mid-range jumper by Dominic, saw the lead extended to a comfortable 57-48.

But Goh Yao Ming of Presbyterian High showed they were not done yet. He replied with three consecutive baskets to close the gap to 54-59 with a minute left on the clock! Catholic High’s players could find no way to stop him at this stage as he seemed to grow stronger with each play.

With 30 seconds left, Yao Ming found himself with the ball again and drove strongly to the hoop, drawing a foul by Jabez in the process. It was the final chance to level the scores. Agonisingly for Presbyterian High, his first free throw bounced off the rim. Although he made his second count, the four-point gap was too much to close within the short time. Catholic High then ran out the possession to emerge 59-55 victors.

Later during the prize presentation, Russel Low deservedly received a Man-of-the-Match prize for his performance. Both Yao Ming and him had combined for an incredible 43 of his team’s 55 points. In the end, a more balanced team scoring by Catholic High ensured that they clinched the ‘C’ Division championship title for the second year in a row. 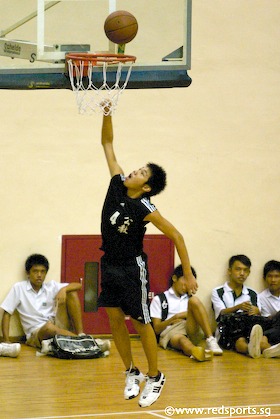 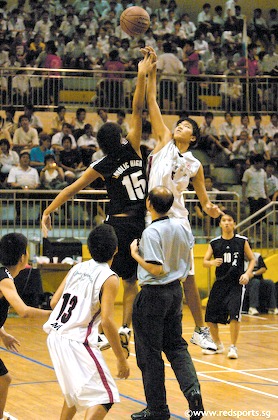 Some highlights of the final. © Ian Chew 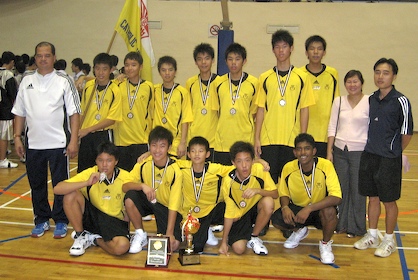