Inspiration from our Badminton Youth 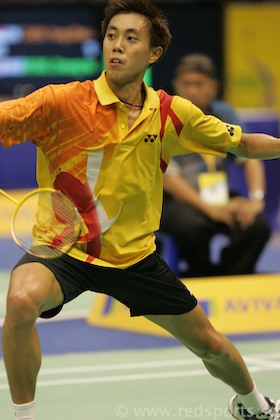 But I think we all made it through pretty well. And we wouldn’t have done it, if not for the much appreciated help from our student volunteers Lai Jun Wei, Shaun Chook and Goh Shao Wei. And of course, all the exciting contributions from all of you readers that came in through our emails that continued to tell the school stories. Finally, the constant company you regular Chat-boxers gave us throughout the hustle and the bustle (and the usual fire-fighting and smack downs you guys helped with when we old folks weren’t around!) – I think we might have gone bonkers if not for your virtual presence!

So a big ‘thank you’ for understanding our cause that week, and for giving the Red Sports Crew a chance to experience first-hand and get up close and personal with a world-class event.

I am not a badminton player, by all accounts, not even down at the outdoor court just across my apartment block (though now I wish, and I actually think, I could be one). But I suppose I must have been born with the right ‘jock’ genes and an inherent passion for most kinds of sports. And with those two attributes, even as a spectator, I appreciate the strategic beauty of any single game as if I were playing it myself, and most of all, I breathe sports and let it infuse my life like it were a game in itself.

Well, how would you recognize if you had that inherent passion in yourself as well?

When you watch a ‘live’ match, see the best players in the world looking all human like you and me yet executing the most astonishing moves you can only imagine seeing on television, breathe in the astounding atmosphere of the entire stadium, feel the sweat of the players upon your own skin, and you get so inspired, so touched you could feel all the little hairs on your arms standing.

Just like I did during the week at the Singapore Indoor Stadium.

It never fails to amaze me how I always think I could read the mind of Kendrick as he went into his match-point face-to-face with the third-best player in the world, or of Ronald as he mustered all his remaining strength in a jump-smash in a last-ditch effort to stay alive in the second set. How I always feel like I could pick up that racket myself.  How I always wish I could be that athlete playing in front of my home crowd, the cheers of my own name resounding in the entire stadium.  How I always tell myself, I am so going to better myself, in my own game.

Well, the fact is that we all can.

We may not have been born with the same extraordinary physical abilities that would perhaps allow us to stump a world number three with a smash so powerful, or to dribble a ball with our feet like we snap with our fingers, or to score thirty baskets in forty mere minutes. But we can all have the same kind of extraordinary mental strength – that is, if you decide you want to.

If they could think that way, we all can too.

So, I wasn’t just inspired by the world’s top thirty players I was lucky to get up close to in action, but more by our youngsters who exuded nothing but pride donning jerseys that read “SINGAPORE” at the back, and looked to have no fear facing, and beating, players ranked a couple of hundreds notches above themselves.

As I watched them from the gallery some fifty metres away at court-side, I thought I saw lithe but powerful, lean but muscular young men with looks of determination and confidence so unwavering they looked like they must have been waging in the battlefield for years.

But as I came face-to-face with two young men — two very identical-looking ones, at that — around a small table in the media room for a casual chat after their stint at the Aviva Open Singapore 2007 was all over and done with, it dawned upon me that these two unassuming chaps were as real and candid as the 16- or 18-year-olds the Red Sports Crew have been interviewing over the past two months.

In fact, they were almost as young.

Aaron Tan, 21, and Ashton Chen, 18, are brothers who look so alike they must’ve confused most other folks into mistaking them for identical twins. Both tall and lanky, they have taken up full-time training with the national squad and if you would like, they literally breathe, live, eat badminton. Mind you, these are boys who have had outings in international tournaments in places I could only dream of as ‘holiday destinations’. But these are no big shots I had to deal with. To a point, even, the brothers seemed media-shy.

But of course, the Red Sports Crew heaved a sigh of relief. No, we don’t do big-shots. We love only our kind of athletes with whom we can have candid chats and make crappy jokes.  🙂 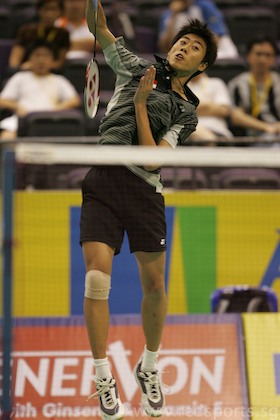 Red Sports (RS): So, tell us, at what tender age did you pick up the racket?
Aaron Tan: I think I was only nine years old.
Ashton Chen: (Pauses, then laughs)  Then I think I must have been six.

RS: Oh, meaning you guys started at the same time?  Did your mom pack you two off to some coach for training or something?
Aaron: Kind of. I started out playing badminton in primary school as an extra-curricular activity, then I got training outside of school.
Ashton: Yeah, I followed my brother, then I started playing for my primary school.

RS: So you brothers played for the same primary school, I suppose?
Aaron:  Nope, I was in Opera Estate Primary School.
Ashton: I was in Yuneng Primary School, then I went to Tao Nan School at Primary Five.

RS: Aaah… you got poached at Primary 5, huh?  Not bad.
Ashton: (Laughs) Haha!  Something like that lah.

RS: What was your first major competition?  You know, the kind of “first major competition” that makes you feel most proud, that you’ll never forget?
Ashton: For me, it was the National Under-14 championship in 2003.  I was runner–up in both the Singles and the Doubles.
Aaron: My first… ?  I think it must have been when I was 14, and I represented Singapore in the Asian Satellite Championship.  That was my first major regional tournament.  But I wasn’t very good then lah!

RS: It has been a while since you guys played for a school.  Tell me, what was the thing you liked best about playing for your schools?  What do you miss most about it?
Aaron: I miss the strong team spirit that I experienced when playing for my school.  Especially during major games, wow it was really amazing.  I really like those cheers and support from my other school friends as well.

RS: Now that you boys are full-time badminton players, how is your regular week really like?
Ashton: We train Mondays to Fridays full-time, and that means 8:30 to 11:30 or noon, followed by a break for lunch and a rest, and then we have another session from 3:30 to 6:00.  Saturdays, we train half-day.

RS: Oh. Wow. So what kind of past-times do you indulge in?  Don’t tell me you play badminton for fun…
Aaron: We’ll go onto the Internet to chat with our friends on MSN, or to check on our emails.  Well, we do check on badminton news regularly.
Ashton: Yeah, and we try to spend our time over the weekend, on Saturday afternoons and on Sundays, with our friends.  We’ll go to the movies or hang out at the arcade centres.
AT: Yeah, only on weekends.  We can’t go out at nights because we’ll be too tired.

RS: Do you have a strict nutritional plan imposed on you?  Or, do you watch your diet?
Aaron: Well, we don’t really have a diet imposed on us, but we have to be really self-disciplined in what we eat.

RS: Yes, yes, I know being a full-time athlete really requires a lot of discipline.  So do your friends complain or make fun of you or anything?
Ashton: Not really complaints because they understand.  But yeah!  They would say, “Aren’t you sick of playing badminton?!” (Laughs)

Nah, I wouldn’t be sick of playing badminton if I were either one of you, boys.  🙂