Figure skating isn’t a sport many Singaporeans know much about, but I believe the little red dot is going to rule the sport some day. I never miss an opportunity to deliver that message to anyone I meet.

I don’t care if you have no interest in skating, or if you disagree with me or even if you openly patronize me with platitudes, hoping I will go away. All I care about is getting people to take notice of the sport.

And that’s why RedShooter found himself at Fuji Ice Palace on Sunday April 1st, with his wife and kids, photographing the second day of events at the Singapore National Ice Skating Championships.

And now he has to agree with me that it is a sport like no other in Singapore.

People describe skaters ‘gliding’ across the ice. But the word ‘glide’ doesn’t capture the sheer power used by these kids to propel themselves around, across and over the ice. Nor does ‘glide’ hint at the kids’ ability to seemingly defy physical law. How is it humanly possible that a small body can jump up in the air, spin two times and land—without breaking anything?

Power, speed, flexibility, grace and a low centre of gravity are the key essentials to become a great figure skater. Ng Yi Ching, the 2007 Juvenile Ladies Champion, earned the highest technical score for the competition. She actually did two sets of double jumps in combination with each other, which means she jumped up, spun in the air, landed and immediately jumped up again and spun twice in the air again before landing again. Yi Ching, who turns 11 years old later this year, is a student at Raffles Girls Primary School.

A gutsy attitude is also quite critical to a figure skater’s success, too. Skaters can’t be afraid of the ice, even though it’s mighty hard. The kids have to be prepared to keep pushing on, no matter what happens. Staying the course can win the event, a fact that is true in every sport. PreNovice Ladies Champion this year, Alexandria Wong, is a secondary student at and cross-country runner for Methodist Girls’ School. This year, she came back from injury to defeat two strong competitors to regain her Nationals title.

Here’s a photo of 15 year old Sarah Paw, a Singaporean who attends an international school in Beijing. Not only can she do these double rotation jumps, she also seems to have the stretch of a rubber band. Sarah is spinning in this photograph, and I’m told she can spin with either leg in this position. It’s called a Bielman spin after a skater named Denise Bielman. Sarah won the Novice Ladies Event, skating to the soundtrack from The Last Emperor for her short technical programme and to Zorro for her free programme.

Competing in Junior, 14 year old Tasha Benfield is currently the highest ranked skater in Singapore. She is an accomplished skater who can tell the story behind her music as she fulfills the technical requirements of the programme. Like Sarah Paw, Tasha is extremely flexible. In this photo, she is performing a move known as an Ina Bauer, named after the skater who created the element.

The youngest winner at the Nationals was seven year old Gazel Lee from Yew Tee Primary School. Gazel has virtually grown up on the ice, after following her older brother Maxel into the sport. She may be young and she may be small, but she is a fierce competitor.

In fact, I think that kinds of sums up all of Singapore’s current figure skaters: young, small and fierce. And that’s why I believe Singapore is going to rule the sport some day. 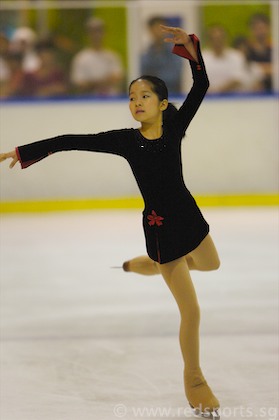 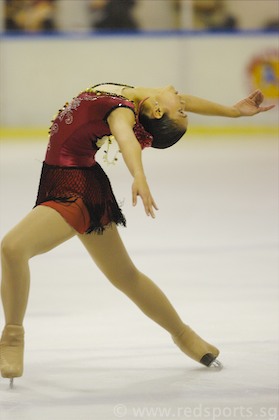 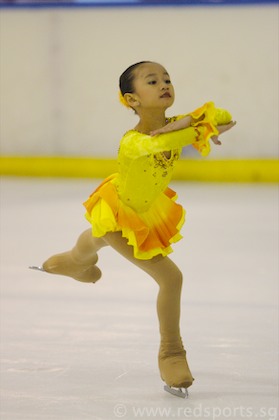